Coyotes at Sharks, the PK still sucks, Mike Smith is poor and injured, and The Ruins

"The hill was rocky, oddly treeless, and covered with some sort of vinelike growth - a vivid green, with hand-shaped leaves and tiny flowers. The plant spread across the entire hill, clinging so tightly to the earth that it seemed almost to be squeezing it in its grasp. The flowers looked like poppies, the same size and color: a brilliant stained-glass red."

San Jose's last game against the Oilers was a sort of weird Bizarro version of their season opener against Calgary: this time instead of sleeping through the first period they were a monstrous, unstoppable terror to behold. The Sharks tore the Oilers limb from limb and then threw the team's bleeding torso into a bathtub full of lime juice and -

Sorry, that got a little graphic. Blame today's book: The Ruins. I'll get back to it at the end of this post.

All in all it was a great game for the Sharks - or rather, it was an A+ first period and then like a C- rest of the game. Obviously I was fine with the Sharks not scoring more than six goals, but it would have been nice for the Sharks to just lock the game down defensively after the first - but they didn't look capable of doing that. Maybe they could have managed it if the team wasn't missing big names on defense - although this has already become a bit of a tired refrain this season, and it remains to be seen if the team will get back to full strength sooner, later, or at all. The Sharks without Brent Burns or Jason Demers have some serious issues on D, so hopefully both of those dudes get healthy soon.

The Sharks penalty kill? It still sucks. Sucked in game one, sucked in game two, sucked for years, no end to the suck in sight. Like I said last time, maybe the aggro PK will work out once the big names are back on defense (hey see look I said it again), or maybe they can shuffle the PK units a bit now that they've finally stopped teasing Scott Gomez and are ready to just suck the dude's dick already -

Sorry, that got graphic once again. That one I can't really blame on The Ruins. That one was all me.

Anyways Douglas Murray played 3:53 on the penalty kill against the Oilers and that's a problem because he should be playing at MOST 0:00 on the penalty kill. Before the season the talk was about maybe having guys like Burns and Demers and Stuart taking a lot of the PK duty to give Vlasic and Boyle more rest time and letting Murray enjoy being a healthy scratch but obviously we're not there yet. Honestly even though he's a rookie and probably sucks I'd rather see Matt Irwin getting PK time than Douglas Murray. 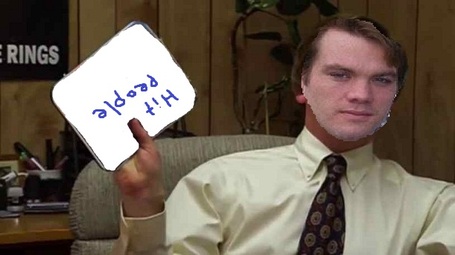 But who cares about the penalty kill, right? Joe Thornton, Patrick Marleau, Logan Couture, Joe Pavelski, and Dan Boyle are all REALLY great hockey players and can totally embarrass a team like the Oilers. Hell even T.J. Galiardi had two points against Edmonton and he's a bum!

Optimistically, the top lines will continue to carry the team while Demers and Burns get healthy and Larry Robinson learns who Douglas Murray is and why he can't be allowed near the penalty kill. So far the Sharks have looked very impressive even with these handicaps, so I expect great things from them once all the team's ducks sharks are in a row.

Tonight the Sharks face the Coyotes, who played last night against the mighty Blue Jackets. Mike Smith got hurt last night, so it's likely the Sharks will see the poorer man's Mike Smith, Jason LaBarbera.

Today's book is The Ruins, and as I went through my copy trying to find quotes that weren't either spoilers or too gruesome to post on this blog (or both) I found myself getting stressed out and nauseated all over again, just like when I read it the first time. There aren't many higher recommendations you can give a work of horror than saying that just skimming it makes you feel horrible, so if you like this kind of book then you should pick this one up. There was a movie made out of the book which is pretty faithful to the plot, and a scary film on its own, but if you think you might want to read the book I recommend not seeing the movie or even a trailer first, as the book is best experienced with as little advanced knowledge as possible.

Prediction: The Coyotes take a trip to California - and it turns out very very badly. Sharks win 5-0, with goals from all the good players again and also Galiardi.

"They needed help. They needed a team of paramedics to come in a helicopter and fly him to a hospital. Instead, they were going to pull him up on their own, bumping and jostling him all the way to the surface. And when they got him out - then what? He'd lie in the orange tent, she supposed, moaning and screaming, and there wasn't a thing they'd be able to do for him."