The Vancouver Canucks are not a likable team. Shocking, I know. They may not have the completely detestable piece of shit cake that is Shane Doan, or the flatulent cow abortion known as Mike Smith, but they aren't people that are universally loved. Their fans are obnoxious, Alexander Burrows bites, and they made me hope a team from Boston would win. Fortunately, the Kings made them their bitch during last year's playoffs, kind of like the Coyotes, and the Canucks sort of folded all together instead of just Roberto Luongo.

Now the Kings have one win, and it came against the cheese dicks in the desert. Going against another team they beat pretty soundly, maybe the Kings come out fired up. Or maybe they just have Jonathan Quick make a ton of saves and get bailed out by Anze Kopitar again.

Willie Mitchell meanwhile can't decide whether or not he wants to deal with this lame ass season. Apparently, he can play, Sutter wants him to play, and Willie is essentially saying "Nah, fuck this shit." Does he just not want to play against his former team? Come on Willie, you know you want to deck one of those weird Sedin fucks. They pee together! I heard one of them also had an affair with Heath Ledger. Maybe that was an Olsen twin, actually. I wouldn't put it past them though. 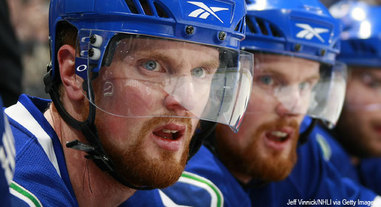 Look out for clue goo.

The Canucks are probably moody because they lost to the Sharks and will be all pissy like a 13 year old girl wearing white pants on one of "those" days. Now it's just a matter if they come out wearing those white pants like they're from Woodland Hills or west Baltimore. The Kings will need to have a couple of guys step up outside of Raccoon Jesus and the big red psycho killer dog. It would be nice if Brown and Richards pitched in. Prediction: One does. I don't know who. This was a shitty prediction.