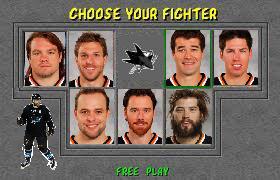 Douglas Murray: The ultimate mighty glacier, Murray's incredible strength and defense come with a trade-off: a complete inability to move. Note: Every Murray vs. Murray mirror match will result in a draw when time runs out.

Ryane Clowe: A tough and aggressive fighter, Clowe's special ability allows him to influence fights when he's not even on the screen!

Niemi: A decent enough fighter in most respects, but definitely not top tier.

Antti Niemi: Secret character, an evil, opposite version of Niemi. Comes from the anti-verse.

Martin Havlat: A good fighter, but very fragile. Due to a bug in the game, Havlat sometimes gets hurt while still on the character select screen, and begins the fight already KO'd.

Brent Burns: Just a blatant rehash of the character Reptile, complete with the face-eating.

Patrick Marleau: Really awkward to control, but can be impossible to stop once he gets rolling.

Logan Couture: Sometimes when you mash the buttons Couture does this awesome bite move that's super-powerful but then you can never figure out how you did it.

Today's book is The Beach, by Alex Garland, a great book which was made into a not-very-good movie. In keeping with our Mortal Kombat theme, video games are mentioned in The Beach a few times, in ways which struck me as refreshingly authentic for the narrator, a dude in his twenties living in the 1990s. According to Wikipedia the book was influenced by Heart of Darkness and Lord of the Flies, which I guess gives you a good rough idea of what it's like, only it's much more modern and accessible and exciting than those works (though both of those are great books too, of course).

The Sharks are on a crazy roll to start the season. We're all intelligent adults here, so I hope no one is fooling themselves into thinking there hasn't been a huge amount of luck involved in San Jose's five wins thus far - but there have also been plenty of reasons to be optimistic that this season will turn out better than the last one, even once the team comes back down to earth a bit. It's also great that the Sharks have won all these games now, at the beginning of the year, when dealing with injuries to their defense. The team could have started the season struggling and it would have been accepted and excused, since they were missing Demers and Burns - but instead they've looked fantastic.

The winning streak has to end eventually - but NOT tonight. NOT against the Ducks.

Prediction: Sharks win 3-2 in overtime, with goals from Couture, Pavelski, and Marleau with the Fatality.

"Though I walk through the valley of death I will fear no evil, for I am the evilest motherfucker in the valley."