Ducks vs Sharks: Round One, FIGHT!

The Ducks and Sharks meet up for the first of four games this season, the first time any of the California teams meet all year. So what better way to prepare than with clunky Mortal Kombat jokes? 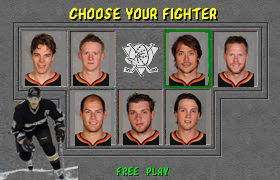 Jonas Hiller: A very apt fighter, however if hit in the head too much he becomes disoriented and dizzy.

Corey Perry: Always picked by the obnoxious kid who just does the same move over and over again just to annoy you and still ends up winning somehow.

Saku Koivu: Every fighting game has a pair of characters that are basically identical, with minor differences. Mortal Kombat has Scorpion and Sub-Zero, Street Fighter II has Ken and Ryu, and the Ducks have Selanne and Koivu. I'm not sure which one is the evil one.

Ryan Getzlaf: Lots of people wonder why Getzlaf has never gotten hair transplants plants or otherwise concealed his baldness. It's because he uses it to harness the power of nature's electricity.

Matt Beleskey: Beleskey actually fights occasionally, so he has that going for him.