Just a glitch in the Matrix. Nothing to see here.

Go to the game and do my job for me: Los Angeles Kings tickets.

Out of all the places I went through a month ago, Nashville was the least shitty. It was kind of like a poor man's version of San Diego. Instead of the Pacific Ocean, there was some brownish river. Instead of the Chargers, they have their own inept fuck up of a football team (so basically the same). Nashville is otherwise known as Music City, but the problem there is that 90% of that is country music. The same thing continues with the fact Nashville gets a hockey team, but the problem is it's the Predators.

The Predators had been very smart with their money. Then they fucked up and matched an absolutely bat shit crazy offer the Flyers threw at Shea Weber. The Predators also had been smart about bring up goalies, easing them into play, and creating decent starters, only to let them walk once they got to expensive. They then fucked that up by handing out a huge ass deal to Pekka Rinne when Anders Lindback seemed primed to go. But whatever. Nashville also has a tendency to have huge ass tornadoes rip through them, so I guess they have bigger problems. though not as big as Pekka, amiright?!

Fine. Almost as awful as natural disasters is the Predators name itself, which was voted (by one guy) as one of the worst names ever for a team. As an aside, the Ducks made this list also, so yeah, fuck you Anaheim (according to that same guy)!

Meanwhile, the Kings are back to sort of looking like they may in fact be nearly ready to play a pick up game of hockey. Just kidding. The Kings are winning and letting me shit all over annoying teams again. I could give a fuck about the Predators, as you could probably tell, so I'm not expecting great things. My prediction of not guessing between Brown and Richards stepping up also missed, as both did very little against Vancouver unless you count falling on top of Luongo and whiffing a shot but still somehow getting an assist. Dadgate is in full swing with no word from Willie Mitchell on whenever he feels like doing his job instead of just sitting around and collecting a check. Actually, that's a great plan. Mitchell's a genius.

So another, likely wrong, prediction for tonight (though I am writing this the night before so bear with me): Penner plays. Penner scores. Please, do not hold me to this. I'm far better at talking shit on twitter after wins and not as good at channeling Miss Cleo. Or having gameday posts show up when they are supposed to, so yeah, those two things. And grammar. Spelling also. 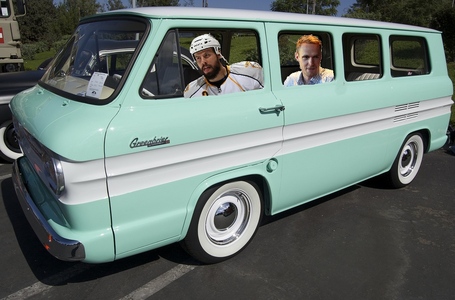 But I have MS Paint. I'm good at that. No matter what Jer says. Asshole.