I am going to go out on a limb here and really pull down some big guesses at what will happen this season. And none of that "bold prediction" crap they feed you at other "journalistic" hockey sites. This is from my gut. I have burritos there. And you assholes would never second guess half digested burritos, would you?

- Dwight King will score 20 goals in a shortened season, but will be arrested before the playoffs start for sexually assaulting a bear at the San Diego Zoo.

- Erin Andrews will be forced to learn about hockey because of Jarret Stoll. She will leave him for the same reason.

- Everyone will like Dustin Penner for approximately five games before hating him again.

- Jonathan Quick will play at least one game drunk out of his mind. Like I did in high school.

- Darryl Suter will finally just eat his entire own face after Matt Greene commits another delay of game penalty while already on the penalty kill.

- Trevor Lewis will learn to skate. 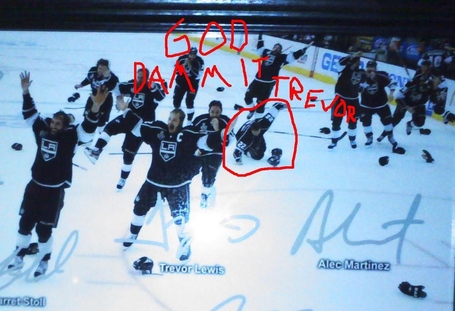