Ducks Gameday: Land of the Blinds

Share All sharing options for: Ducks Gameday: Land of the Blinds

I'm a pretty big computer nerd, and I've always been one. As such, I've run a number of websites throughout my life, some stretching all the way back to when I was 13 years old. Most of these are long gone by now, but I still run a few sites and even some of the the websites I haven't touched in years are still accessible (if not maintained).

Today's post revolves around one of these old websites; still operable, but completely abandoned. I was clearing out my inbox recently, and in doing so came across a series of emails from earlier this year regarding an old site of mine, in which an employee from a small window blinds company emails me with a simple request.

I had mostly forgotten about this chain of emails until coming across it this week, but I got a bit of a laugh out of it upon rediscovering it and thought I'd share it with you (along with some of my commentary, in bold). Instead of ignoring me like any other reasonable adult, the employee continues to engage me as I very childishly egg him on. I've removed both the company's name and URLs, as well as the employee's first name. I'm not sure why, but it's probably the right thing to do. I've also removed my own old website URLs, because I don't need you creeps snooping through my life. 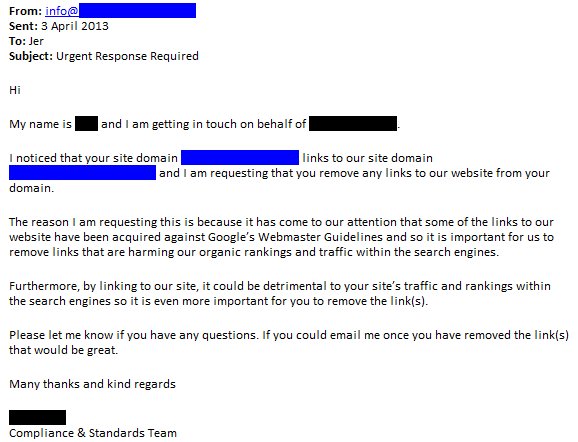 As you can see above, it started out simple enough. Some lowly employee with a fancy job title shoots a form email to me that he's probably also sent to a few dozen other people, asking me to remove some spam that someone had posted on one of my sites, linking back to his company's site. I proceed to offer a small lesson to the gentleman...

Apparently no good deed goes unpunished, as the gentleman lashes out at me...

Gosh, a negative SEO attack? While such a thing certainly exists (I won't bore you with the details), a no-name company that lacks an internet presence to begin with generally does not compel competitors to waste money on negative SEO attacks. Competitors would just give fake bad reviews of this dude's employer on Yelp like any other reasonable asshole, for free. As far as looking at my own situation...

I think it's great that this guy believes that posting in the comments section of a website counts as a website being "hacked." Anyway, our friend is not pleased with this, and continues...

What always fascinates me when I'm killing time on the internet, riling up morons, is how they refuse to just stop talking to someone who is clearly frustrating them. There's not even an argument here to be won for this guy! It would be easy to ignore me completely and just go about his day. As you can see, he didn't.

...And clearly I'm not going to stop! My low value website's reputation is on the line! And as you can tell by my work at Battle of California, I've got a lot of time on my hands.

Haha, this guys assumes I have money to begin with.

I'm beginning to wonder if this company's compliance and standards are really being upheld by the Compliance and Standards Team. Quis custodiet ipsos custodes? 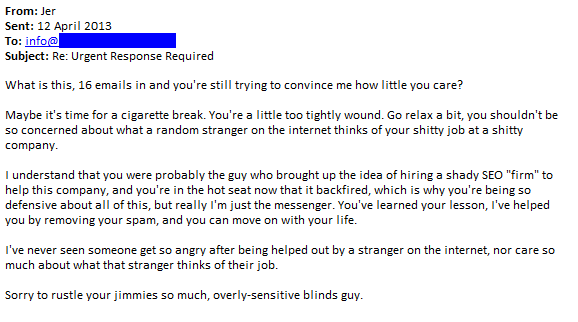 ... This would be the last email in the chain. The gentleman finally learned to do, after 16 emails over the spread of 9 days, what any reasonable person would have done after my second reply: Stop engaging someone who gets you so riled up when there's nothing at stake and no reason to continue the conversation.

I can't believe you read all of that.

Surprisingly, there's not much history between these two teams. But here's some highlights from when the two faced off overseas in Stockholm, Sweden on October 8th, 2011 (Ducks take a 2-1 shootout victory):