I may have (another) serious problem

I am really worried. Scratch that. Terrified. The Kings won their last game 4-3 in overtime, coughing up a 3-0 lead in the process. Yeah, that's a concern, but that's not what I am focused on. No, this is something where I am nervous about my own health and the health of the Kings organization. I am okay with Daniel Carcillo playing hockey. With the Kings. On the second line. I'm so sorry.

I know it's wrong, but I don't know what else to do! Kyle Clifford isn't cut out for the top six, Matt Frattin has been unremarkable, and Dwight King is first line only material. That leaves Carbomb as the only choice! Shit, I just referred to him by a nickname. I don't want to cheer for this piece of shit, but...but...it's not that bad! He drew a penalty, goaded other players, and played physical. He even blocked a shot! Oh god, I'm rationalizing!

What do I do? Do I see a doctor? Just kill myself? This isn't supposed to happen! The Kings don't use guys like these, who are complete clown dicks and- 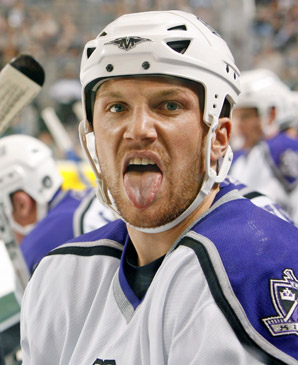 I warned you this was going to happen. AND YOU ALL DID NOTHING. It's been one game, and all of a sudden I just assume he will be back with Mike Richards and Jeff Carter. That's not normal, and it sure as hell isn't good. It's too late. I wonder if there are any Carcillo purple and gold jerseys?

NO! He's a jerk! Remember his disgusting tweets!

Yeah, but they were kind of funny also. And he was pretty funny throwing the first pitch at the Dodgers game into the crowd.

What? Are you kidding? He's a fucking nipple wart.

I've just been giving him a chance! He's not so bad. He's just an agitator. That's his job.

Oh god. Get Carter away from him.

After a dominating first period, drawing penalties and scoring on the resulting power plays, things gradually deteriorated for the Kings. Once they were in danger of completely blowing a win, they turned it back on later in the third and drew another penalty, scoring in overtime. Hooray.

Carolina...I don't even remember when the Kings were last in the south to begin with. Nashville's like a shitty purgatory between the Mid-West and the South, so they don't really count. I was last in the south (North Carolina at Chapel Hill specifically) in the spring of 2011 when I was a functioning member of society. Times were different then. The Kings wore purple, Dustin Penner was a King, and Robyn Regehr was not giving me ulcers yet. I spent my trip bar-hopping after I completed my one hour of work for the week. I don't remember N.C. too much, but their barbecue is really vinegary, and I hate that shit. So fuck the Hurricanes I guess, I don't know

Prediction: 1-0 Kings, with the game winner coming from Kopitar.