I've collected some of tweets from Dustin Penner from the past few days, and I'd like to share them with you.

Share All sharing options for: Ducks Gameday: The Penner Collection

Yesterday, the NHL suspended Ryan Garbutt for his dirty hit on Dustin Penner this past Sunday (I talked about that hit here). I'll talk more about the suspension in tomorrow's gameday post, but today I want to talk about what Penner was up to after he was knocked out of the Dallas Stars game by Garbutt.

In what was likely a concussion-induced haze, Dustin Penner took to his famous Twitter account to troll and chirp at the morons who don't quite understand hockey or dirty hits. The results were predictably hilarious, so I've decided to collect a few of the key tweets here to share with you.

And because I like you, I've decided to include some of my commentary. 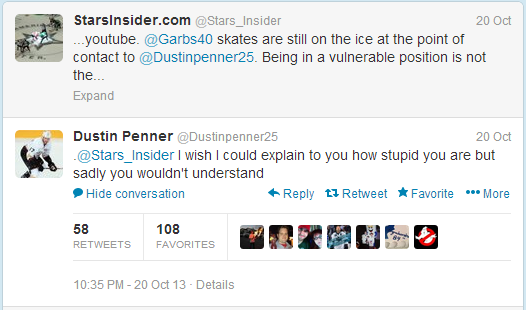 @Stars_Insider isn't someone I follow on my timeline, so it's surprising just how often I see him in arguments with people I do actually follow. His statements are always shockingly dumb, and he's clearly outwitted every time I'm come across a conversation he's involved in. Luckily for us, he's too dumb to recognize he's always outwitted, so he keeps going. He's a great case study for the Dunning-Kruger effect.

Above, Mr. Insider insists that Garbutt didn't leave his feet prior to contact (making it pretty clear that he is unfamiliar with the hit in question). Penner responds with simple chirp, but @Stars_Insider insists that Penner prove him wrong, which he does with one image... 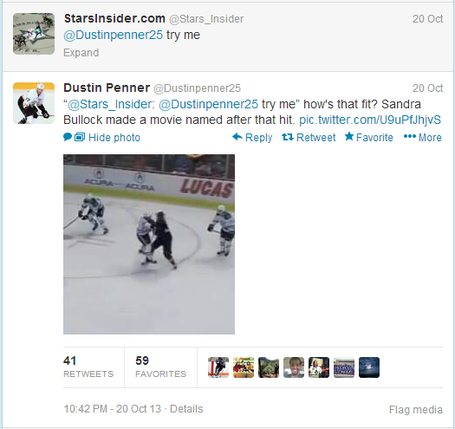 Unfortunately for @Stars_Insider the image, just like the actual video, shows Garbutt launching off the ice prior to any contact with Penner. Whoops!

Stars_Insider had quite the back-and-forth with Penner aside from what I've shown there, and he was so belligerent that I guess the rest of the people who write on the website that Stars_Insider is associated with now handle all tweeting from that account, and this guy no longer uses it. Ouch.

Anyway, nice reference to The Blind Side by Penner there (or was it Gravity? Maybe Crash.) 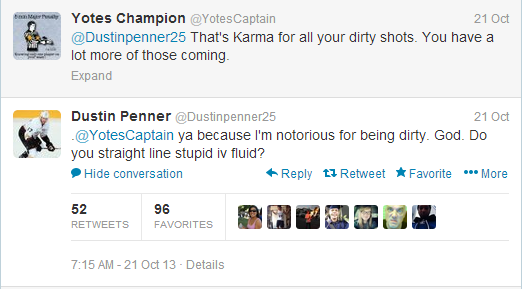 I'm not sure exactly how straightlining works (Dunn could probably fill us in), but doping up on stupid actually sounds kind of fun. 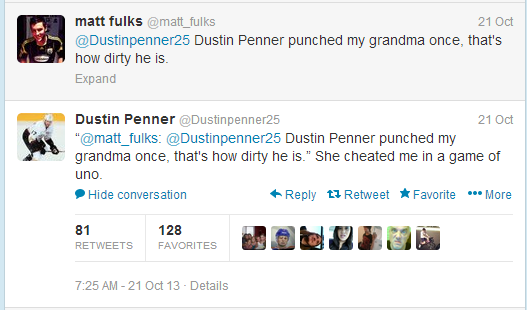 True story: One time I was playing Scrabble with old people at a senior assisted-living center, and one of the old ladies made up words to collect on points. I didn't have the heart to call her out on it. I guess punching her would have been the propper response.

Shit trolls is a great insult, but works even better as the name of a motorcylce club.

(No lie, @toesthrower4 then goes on to brag about playing in the NLHL, insisting it is better than the NHL.)

Looks like @thauck11 has since gone back and deleted his tweet, but I'm sure it was something really intelligent.

Today's prediction: One of the Canadiens dies on the ice tonight. Ducks win 13-2.

Saku Koivu's first return to Montreal as an Anaheim Duck, after previously playing for the Canadiens for 13 season (9 as captain). January 22nd, 2011: