Forgive me, but I'm stretching this out into a third post now.

In my past two posts (here and here), I've wasted some space pointing out the hilariously stupid things that uniformed fans said in defense of Ryan Garbutt's indefensible hit. Unsurprisingly, these people enjoy saying idiotic things, but if you point out just how idiotic they are and share them with other people, they blow up and act like children who have been wronged.

Good news for us!

In what I imagine has to be my last installment regarding these idiots (until the next Dallas Stars player attempts to murder someone), I've collected some of the responses I received when the individuals from my previous posts found out that they were the Garbutt of a joke and that no one would ever take them seriously.

When I first tweeted out that these folks were put on display at Battle of California, I made an unfortunate typo. I decided to leave it, and it paid off. A couple of the people who knew they couldn't defend their statements predictably decided to instead go on the offensive and attack the typo: 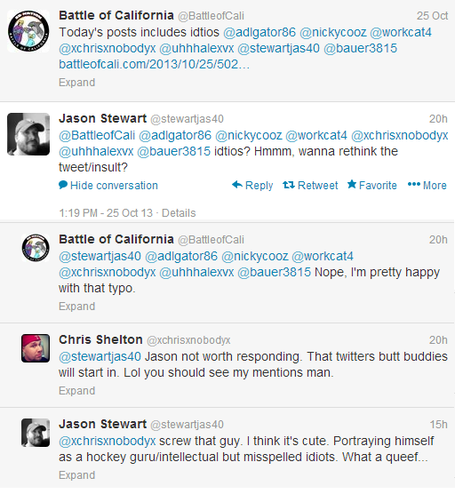 I don't recall referring to myself as a guru or intellectual, but I guess that if you've watched hockey for over a week and can understand that head shots aren't allowed in the game then these kids think that you're some sort of an elitist prick. As for Fred Durst Chris Shelton, you'll be seeing plenty of him down below. But I'm starting to feel a little bad about this, because the fact that he actually used the phrase "butt buddies" (and his friend Jason called me a "queef") makes it pretty clear that I must have been taunting middle schoolers here. No wonder they're so moronic, they're just kids. Oops. 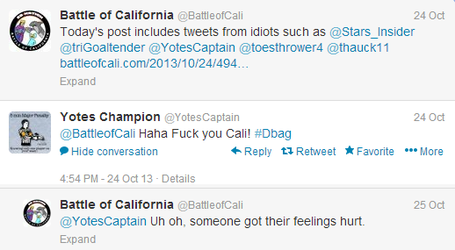 This guy above decided to take out his frustration on our entire state! Ouch.

Mr. Walker below decided that anyone who knows more than he does must be a liberal, uses this as an insult, and then goes on to make an argument that is easily refuted by simply watching the suspension video. By the way, he mentions a "4inch height difference" as defense of Ryan Garbutt not having to jump in to his charging headshot to make contact with Penenr's dome, but fails to realize that the 4 inch difference comes from Penner being 6'4" and Garbutt being 6'0"... Which actually supports the fact that Garbutt had to launch upward to make head contact. I guess facts have a liberal bias:

Jordan gave up after this point, presumably because he finally watched the video and realized he had embarrassed himself.

But don't worry, an even more hilarious dude came to take his place! I mentioned we'd be seeing more of Fred Durst-enthusiast Chris Shelton, and he definitely didn't disappoint on Friday. He had some of the more cringe-worthy responses... 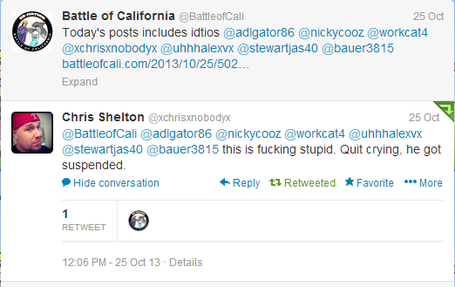 Chris tried really hard at this point to pretend that he wasn't bothered by being called out, but he spent the next seven hours subtweeting and complaining about us in an attempt to convince his followers (and more so, himself) that he didn't care: 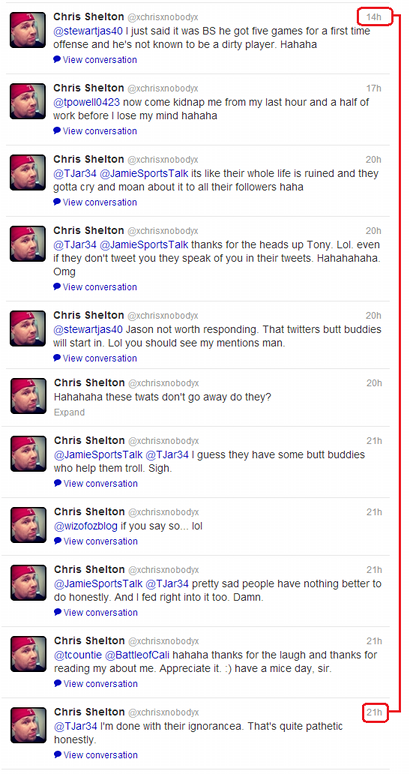 That seven hours of tweeting certainly has me convinced, Chris!

It was a good run, but I think it's time to let these idiots continuing being idiots undisturbed. But for future reference, Stars fans, here's the appropriate way to respond to the imbeciles within your fanbase:

As for tonight's game...

Columbus's GM, the Finnish Jarmo Kekalainen, defects to join fellow countryman Teemu Selanne with Anaheim and leads the Ducks to a 3-2 victory.

No video clip for this one, but here's an ESPN headline from November 2005, when the Mighty Ducks traded for some kid named Francois Beauchemin (and lost Sergei Fedorov):