That motherfuckin' Wolverine. Nice butter knives. Healing powers? Shovel to the head. Knock you out. Cut your head off. You're dead. Cyclops meanwhile is frying suckers left and right just by looking at them, all while he's scoring the honeys. Homeboy Scott Summers gets married twice, has his wives die twice, and gets back together with one when she wasn't really dead. My guess? Saved by his girth. Lord knows he had to be packing another cyclops down below, amirite? The point being, people always are trying to ruin Cyclops' empire.

But he doesn't stand for that shit. Put a bomb in his chest? Fuck you, eye zapped. Poison his son? Fuck you, send him to the future. Kill a wife? Fuck you, if you are a female that will likely occur. He'll get a new wife anyways, no biggie. Ain't no stopping the Cyclops train. Like the one in his pants! Amirite? Yeah, Wolverine may have made a move on (one of) Cyclops' lady, Jean, but even afterwards Wolverine was all, "Damn gurl, you should know not to do that. Cyclops is gonna toast our asses now." It's all true, look it up.

"OOOooooooOOh but Wolverine is a badass. He's a rebel. He only fights when he has to!"

All I hear is you being a little wiener. Time for you to Cyclops up, chowder-pants. 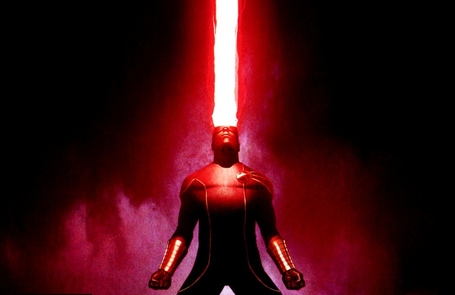 So while Wolverine is all, "My way or the highway," Cyclops is all, "My way is the right way and that's the way we are fucking doing it unless you wanna get vaporized." Why do you think Cyclops runs the X-Men and not Wolverdick? Yeah Logan Wolfman or whatever gets his own comics, but Cyclops runs the show. It's because the X-Men can't stand Wolverine being a pain in their ass, and dragging them down all the time. That's why Cyclops was named the best X-Men and Wolverine was fourth. Fourth. He was behind Kitty Pride (a girl!), and the guy on the handicap placards. What a loser. Also: Cyclops' dad was fucking space pirate. What does your dad do? Accounting?

In the movies Brett Ratner ruins Cyclops and pisses off everyone. Ratner, who looks exactly like how you would imagine someone named "Ratner" would look like, is also responsible for such turds as the god awful train wreck called Catfish. Remember Tower Heist? Of course you don't. No one does. That's because Brett Ratner sucks. Wolverine is a Canadian. You like him more than Cyclops? Way to hate America, dickbrains. 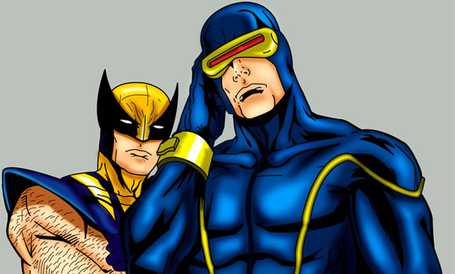 "What's that? Wolverine blows farm animals and has freakish bicep hair? Copy that"

Speaking of farm animals and people named Logan, let's break this down with the Sharks. A lot of "experts", aka glorified bloggers who no longer swear and don't make dick jokes, have said this year is the Sharks year. They loooooooove choosing the Sharks. They think it's different, and that the Sharks really are badasses. Much like how some nerds like saying Wolverine is their favorite character from Marvel to be different and try to appear masculine. It's a front. Wolverine and the Sharks always are runners-up and then you look like an idiot for picking failures.

The Kings are still pretty damn good. The Sharks are, too. The difference is in crunch time the Kings, much like Cyclops, get it done. The Sharks? They shoot it into Jonathan Quick's glove. Or in Wolverine's case, run away. Neither looks good. Have fun singing about France, Logan. San Jose will whine a bunch about injuries, but the Kings are in the second part of a back-to-back. From smelly, old Arizona [shudders].

As for that game in the Phoenix region, the Kings took a lot of penalties again. It was a rather ugly game. Especially when the wheels started coming off for the Kings. Not a great night overall for the Kings, but an even worse one for the top six forwards on L.A. Not pretty. Not at all. Not like Cyclops. 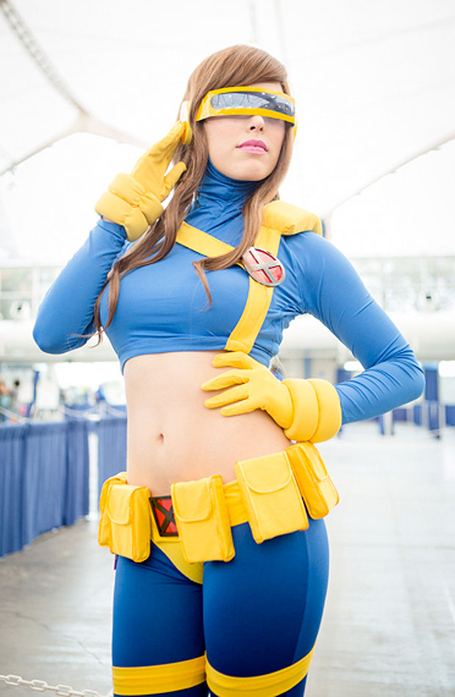 Prediction: Another shootout. Professor X falls out of his chair.