The 5 Funniest Hockey Tweets of the Week: Helmet Theft Edition

Collecting the top attempts at hockey humor on Twitter for the week ending 11/10/13.

Share All sharing options for: The 5 Funniest Hockey Tweets of the Week: Helmet Theft Edition

Phantom OT goals, drunks stealing hockey equipment, and Pat Sajak all teamed up to make this another exciting seven days in and around the NHL. Here are the five funniest hockey-related tweets from the past week:

More Carlyle on tweeting: "I don't know what you guys are doing!" Looks at @reporterchris. "Hey! What are you doing!? Hey!" *bangs on table*

Randy Carlyle getting mad and confused about people tweeting fits in perfectly with every other fact I know about Randy Carlyle.

Dan Carcillo for Mike Brown? Can we make this trade happen?

The helmet wasn't the only thing that drunk stole. He also made off with...our hearts. 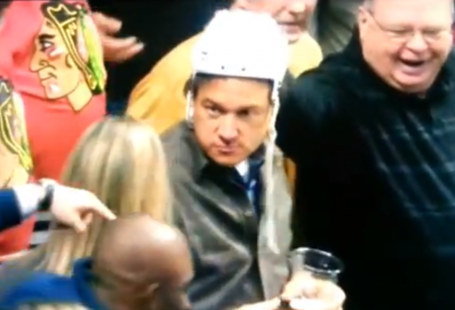 Taking a cue from the @NHL, I'm planning to jump Trebek and pummel him in an effort to fire up my staff and prove my manhood.

The funniest part of this tweet for me is imagining Alex Trebek cutting Pat Sajak's throat with a razor and then casually going back to hosting Jeopardy! while covered in blood.

#1 -The Fake Dan Ellis Memorial Tweet of the Week!

You have to laugh about it, right? I mean, what else are you going to do?

Was @TheNHLHumor funny this week?

No, NHL Humor was not funny this week. Better luck next week!