Sharks Gameday: Burns it all down!

Brent Burns is still hurt, so the Sharks are probably going to continue losing.

Share All sharing options for: Sharks Gameday: Burns it all down!

The Sharks have now lost five straight games. Three of those loses have come to division rivals, and the other two were loses against teams that, for lack of a more accurate word, suck. Sure, NHL parity is such that on any given night any team can beat any other team, but the Sharks have no business losing to the Sabres AND the Jets in the same week.

If you want to look on the bright side of things for the Sharks, obviously the fact that four of their five loses have come in overtime or the shootout is better than if those were all regulation loses. The Sharks have continued to earn points, which is critical given how competitive the Pacific division is.

Going forward, it's obviously critical for the Sharks to get back to their winning ways as quickly as possible. And while Todd McLellan shuffles the lines and defensemen come in and out of the lineup, the best way for the team to improve would probably be for Brent Burns to start playing again.

When Brent Burns is healthy and playing as a forward for the Sharks, the team rules. When he's on D or out of the lineup, they struggle. As pointed out in Kevin Kurz's article from Monday: 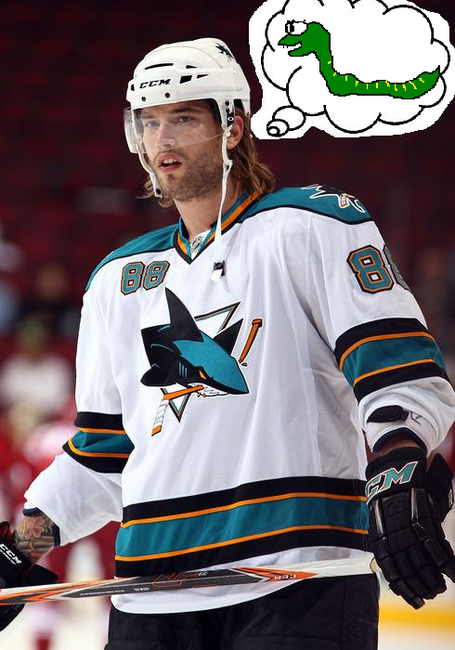 The Sharks fell to 15-9-10 with Burns either out of the lineup or playing defense since the start of the 2013 season. When Burns is a forward, the Sharks are 20-9-2, and average nearly a full goal per game more.

It's looking like Burns will finally get back into the lineup relatively soon, but even that is up in the air at this point. And since there has been no official word on what exactly is wrong with him, it's tough to predict how quickly he might be back at his physical peak once he does finally return.

Regardless of whether or not Burns can get back into the lineup against Calgary, the Sharks really need to try to turn things around. Good teams don't completely collapse with the absence of one player, after all, and the Sharks are definitely a good team...right?

Prediction: No Brent Burns. The Sharks win 2-1 in overtime after having eight goals disallowed in the extra frame.

Video Gamery: Today's video game is Shadow Dancer: The Secret of Shinobi. It was an awesome ninja game where you had a dog that barked all the time and would attack people for you and you also had magic ninja powers and if you got hit once you died and there was a level about halfway through where sometimes you would be in the dark and couldn't see your guy and that shit was hard as hell.