A look at some of Jer's eBay feedback before tonight's Ducks @ Panthers game.

During the offseason, the Florida Panthers were sold for $250 million.

Selling and buying crappy things reminded me of when I was a much more active eBay user. I'n not sure exactly when it happened or what triggered it, but at some point, I got pretty tired of leaving the typical feedback for junk that I had bought (or sold).

"Great seller. Would do business with again!"

No, that wasn't for me. So I started to change it up a bit.

As you can see above, it started off innocently enough. I simply acknowledged the very real fear that we all have every time we've bought anything from an eBay seller: We open the package with anticipation, excited to finally receive our purchase, and BAM! A god damn ghost is flying out all over the fucking place, ruining your whole life.

Lucky for me, the next time I bought something, this didn't happen:

When I got over my fear of haunted packages, I started worrying about others things eBay sellers might be putting in packages...

Finally getting over my fear of sellers entirely, I started to get a little more brave with my purchases:

It says that identitymerch is no longer a registered user, so I probably put him out of business.

Back in the day before Skype or smart phone apps made it easy to record calls for interviews or prank calls or lewd, harassing calls to eBayers, you actually had to buy extra, physical equipment for it. Weird.

At some point, I needed to buy a laptop charger. Apparently I bought the wrong model, but I certainly enjoyed the purchase none the less...

Things started to get a little risqué:

I decided to pay-forward the favor of a previous seller when I finally sold something useless on eBay myself:

But sometimes I still get anxious...

But when you get down, you have to focus on the little things in life:

I bought an extra controller for my Xbox 360 once, and I guess that was a bad idea...

Sometimes it's nice to let people know what you're using their old used items for. Like this Zippo lighter I bought:

eBay is a great source of cheap phone chargers, guys...

You can also buy some decent swimming pool cleaning equipment on there:

What actually has surprised me about this is no one who has sold me anything (or bought an item from me) has ever played along and responded with like feedback. They all automatically submit that "Great Buyer!!!!!!!!!" crap without apparently looking at what you left them on their feedback page.

Similarly, eBay hasn't minded too much. The only feedback I've left that they went in and removed (and subsequently sent me a warning for) was when I told a seller that since buying their item, I had "received 110% more p/usssy" (intentionally spelled this way in order not to trigger eBay's automatic word filter). It stayed up for a month or two, and I have no idea if it was eventually removed because the buyer complained, or if eBay has some sort of feedback review process.

So there's some of the eBay feedback I've left. Now leave some of your inane feedback in the comments.

Resident NHL nutjob Tim Thomas politely request that nobody tread on him.

Both the Florida Panthers and Mighty Ducks of Anaheim entered the league the same year. In 1993, there was an expansion draft to fill these two team's rosters. Here are the first 20 results from that expansion draft (from Wikipedia): 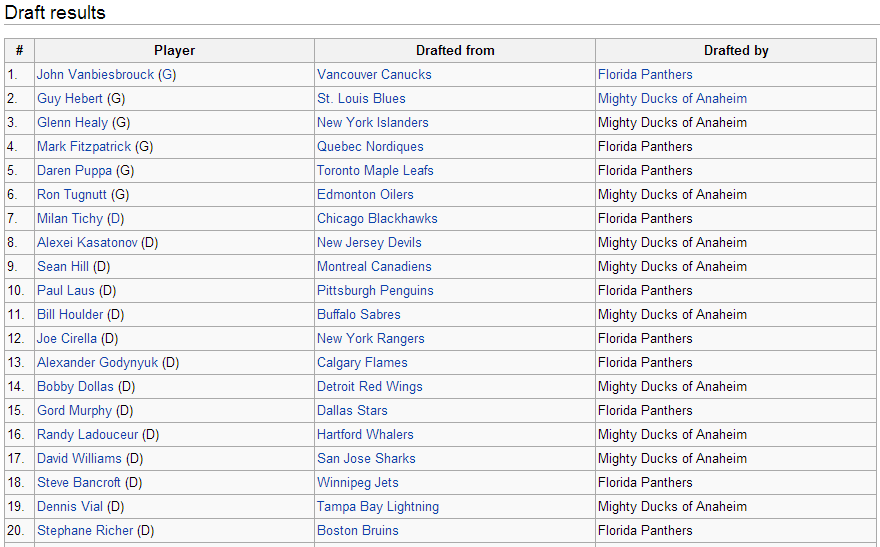