Did you hear the news? Because Darryl didn't

Share All sharing options for: Los Angeles Kings Gameday: Out of Touch

Bad news, Kings fans. Keaton Ellerby...is gone. Well, sort of. He's been waived. I know, I'm upset too. But you know who is the most upset? Darryl Sutter. He can't believe it! 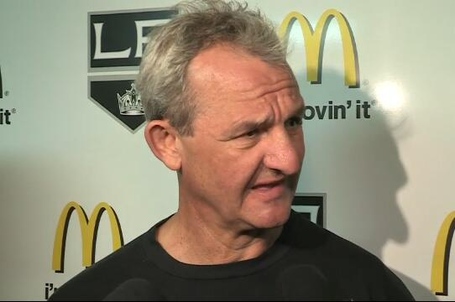 Okay, so Sutter is actually upset about the fact no one told him that Jeff Carter was apparently injured. That news was cycled through the twitter-verse, so when Darryl had his "meet the media" moment and the topic of Jeff Carter being in walking boot came up, he was not pleased. He looked rather bitter, so to speak. Because, as it turns out, according to ol' Farmer Darryl, nobody told him. Of course that is really interesting seeing how Ellerby, as previously mentioned, was waived, and that Tyler Toffoli and Linden Vey were on their way up to the NHL. This could be a growing rift between general manager and coach. Or perhaps a slip of just not letting Sutter know, while everyone else found out. Or maybe, it was just a communication breakdown. But it's a weird occurrence.

So what else has Darryl not been told? It's anyone's guess really, but he does have a history of missing rather important news.

Poor Keaton Ellerby. I actually do feel sort of bad for the guy. I mean, not that bad, he really wasn't very remarkable. And Tyler Toffoli and Linden Vey are finally with the big club! WOOOOOOO. Cons: No Jeff Carter for who knows how long. Especially since no one knew he was hurt to begin with. To top off the weirdness of the day for the Kings, Alec Martinez was back at practice with the forwards again. Meaning nothing? Probably. But in a day where two prospects are called up (and not the third one, who is a left wing, where the Kings are noticeably weak at), and where the coach has no idea what's up with his active roster, who knows? At least I can hope, right?

Guesses for lines? In all seriousness, I highly doubt Sutter gives Vey or Toffoli top six roles. He proved reluctant to do so with Toffoli last year, even when he was producing. Does Brown move back up? Does Vey even play? Will the Martinez experiment ever pan out? I don't know. Hell, Sutter probably doesn't know, and will possibly be confused like no other as to why Toffoli and Vey are even at the rink. So what I want: