Hey, everybody! Long time no blog!

First, a quick injury update -- Jer's status has improved to day-to-day. His symptoms have diminished, and he has resumed typing. In the meantime, Battle of California has relied on its organizational depth, and today even I've been temporarily pulled out of retirement and put on the job.

So happy Black Friday! Celebrate with an afternoon game so anticipated it even made a cameo in last week's Parks and Recreation: 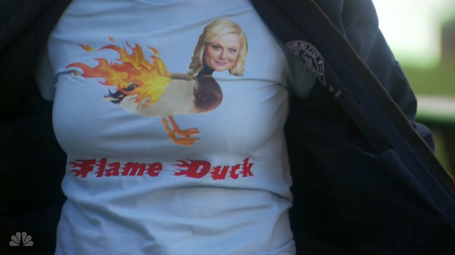 Finally that TV deal with NBC is paying off! :)

Rather than focus only on the Flames and Ducks today, let's go a little broader and look at two segments of the recently-realigned Pacific Division:

Just for comparison's sake, the Old Pacific has a collective record of 3-0-2 against the worst team in the league – that’s only an .800 win percentage.

So, yeah. For the Sharks, Ducks, Kings, and Coyotes so far this season, the "New Pacific" has been easier to get two standings points from than the Buffalo Sabres. 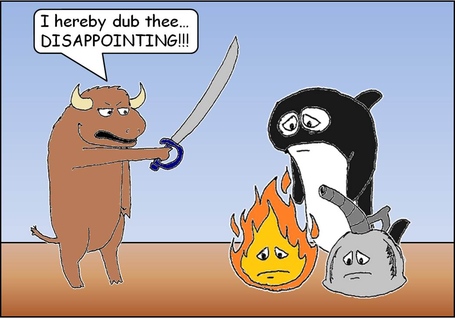 Get it together, other BoC teams. :)

Prediction: It's been over a month since Calgary's last regulation win, so sure -- Ducks 4, Flames 2. Goals by Penner, Perry, Perreault, and Pahlsson Hampus. Old Pacific rules.