An interview with the Sharks chain mail guy!

I sat down (not really) with the dude who made the chain mail Sharks jersey to ask him a few annoying questions.

Share All sharing options for: An interview with the Sharks chain mail guy!

Hey guys check this out: 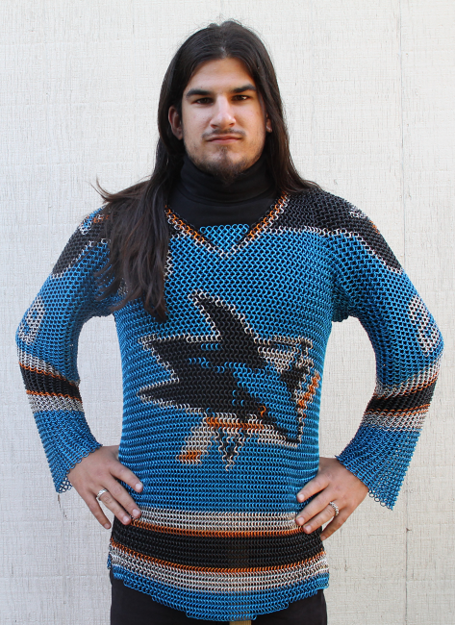 That's Nik Rode (@Metalmind87) in a chain mail Sharks jersey. He made it himself, obviously, because if they sold those things in stores then no one would ever wear any other clothes.

Nik's jersey has been discussed on the hockey Internet in the past (it was a Jersey Foul on Puck Daddy a couple of years ago, which seems rude) but I had forgotten about it until it was recently featured on Twitter. I had a lot of questions, and since I'm an actual investigatory journalist now, I decided to contact Nik to get some answers about his magnificent creation.

Q1) How long have you been making chain mail (or whatever it's properly called), and how did you get started?

I've been making mail for about four years now. It was something I just sort of picked up. I studied a bit of medieval mythology and folklore as an undergrad and was part of the university's archery team (Go Cal...just not in football this year), so it just seemed like a natural thing to pick up. I got started making small things, jewelry mostly, but once I got the hang of it moved on to larger projects like the jersey.

Q2) Can you give us a quick overview of the process involved in making the mail?

It's not difficult to do, just requires a lot of patience. If you're making mail from scratch, you start from a spool of wire. You wind the wire around a rod to make a spring and then cut that into individual rings. I usually do all of this by hand. Most people use power tools to speed the process up. For the jersey, I ended up buying the rings already made, since I don't have the equipment necessary to anodize the aluminum (that's what gives it the color) and trying to wind anodized metals damages the color. From there you have a whole bunch of little metal rings with a single cut through them. All you have to do is grab a couple pairs of pliers, bend the rings to open them up and weave them together.

The sort of default weave everyone thinks of as "chainmail" is called 4 in 1, which means each individual ring passes through four others. You can play around with that a bit to make fancier things, but for clothing that's pretty much the standard. Like I said, it's not a hard process, but when you have to do it tens of thousands of times, having a bit of patience is necessary. I don't have an exact count, but I think the jersey ended up coming in at around 13,000 total rings. A piece of actual armor I'm working on will end up with somewhere around 36,000, each individually wound, cut, and woven.

Q3) How long did the Sharks jersey take you to finish?

I didn't keep a timer going, but I think in all it took a little north of 200 hours to finish. There was basically just a month of me coming home from work and working on it for 4-5 hours a night, and about 8-10 hours each day on the weekends. The fiancee was not happy.

Q4) How far along were you in the process when Clowe got traded, and then when the team announced they were going to change their jersey? How did you feel?

I had finished the jersey when Clowe was traded. I made the jersey in the summer of 2011, so I'd already had a couple seasons (well, a season and a half and a lockout) with it and Clowe on the team. Considering the return we managed to get on an injury-riddled Clowe at the deadline, I wasn't too upset with the trade. Changing the jersey to a new name and number won't be too difficult, since I can just go in and remove the parts I need to. All I need to do is figure out who I want to put on it next. As for the new jersey, I'm not a huge fan of the new ones, so I'm not planning on changing it. Besides, it's a jersey made of chainmail, it's supposed to be oldschool.

Q5) What are your thoughts on the advantages of chain mail compared to studded leather armor with some minor enchantments on it?

I find mail is much more effective for stopping slashing and piercing weapons. Studded leather just can't hold up, no matter how many enchantments you put on it.

Q6) What is your favorite hockey blog? And if you don't say Battle of California, where the hell do you get off?

BoC is awesome, don't get me wrong, and by far the most entertaining, but I enjoy Fear the Fin's statistical analysis as well (love me some Corsi). Going to have to say it's a tossup there (and you don't want to know where I get off).

Editor's note: I was crying at this point, and for the remainder of the interview.

Q7) If you were going to travel to a medieval fantasy world to go on adventures and could take three of the current San Jose Sharks with you to be your Fellowship buddies, who would you choose and what would their roles be?

That one's easy. Burns as our crazed and way too tall dwarven berserker, Torres to do what Torres does and Thornton, who can ride around on anachronistic woolly mammoths.

Q8) How heavy is the chain mail?

Again, it's aluminum, so it's not too heavy. I think it comes in at about 7 or 8 pounds. Normal suits of steel mail usually weigh about 35-40 pounds or so, depending on how they're designed.

Q9) Finally, have you ever had a friend try to slash you with a sword to make sure your chain mail really works? And if not, then how can you ever really be sure?

Not with the jersey. Hitting it with a blade would scratch at the anodization. The jersey is aluminum, so it's not as protective as it could be. That being said, I'm pretty confident it could stop most knives, and at least minimize any sword blows (if anyone sees me at a Sharks game, please refrain from testing this). I am in the process of making a more normal suit of steel mail, and that I have confirmed can take a sword blow.

Thanks very much to Nik for answering my questions, although I still can't believe he didn't just say Battle of California was his favorite hockey blog.