Los Angeles is home to a lot of prestigious events. The Grammys. The Oscars. And of course the L.A. Kings meet and greet with the players at the zoo. Now if you are a well respected celebrity like myself, you had a chance to attend this meet and greet. The fanciest members of southern California's upper crust were all out, met with a delightful spread of hot dogs and hamburgers from girls that clean ice at the Staples Center. Maps were given out on where to meet the members of the Kings. In fact, I kept a copy. 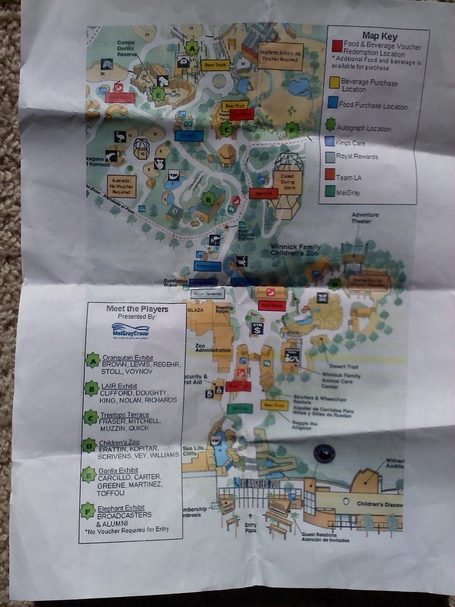 Pretty straightforward. They even included a legend of where each player was going to be. And-what's that? Take a closer look. 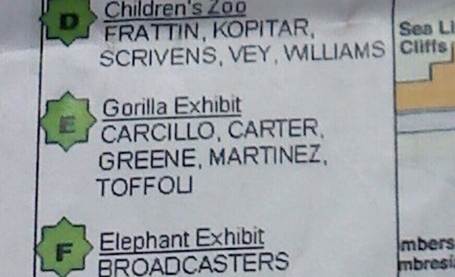 There have been some great moments throughout Kings history. The Miracle on Manchester. Gretzky debuting with the team. A Stanley Cup won on home ice. But this...This is Kings hockey. Daniel Carcillo. At the gorilla exhibit. Fuck. Yes. Unfortunately, I was not to meet Gorilla Salad and the love of my life, Alec Martinez. No, I was set to meet with Drew Doughty, Mike Richards, Kyle Clifford, Jordan Nolan, and DWIGHT KING.

However, there was another caveat with this. The Kings had to still show up at this damn thing. Turns out, they were stuck in traffic. Who the hell is supposed to coordinate these things? Don't they use Sigalert? So an hour later a golf cart whips by, Alec Martinez waving to the masses like he was the Pope, and I realize I have a raging erection. Common enough behavior at a zoo however, so it wasn't a big deal. 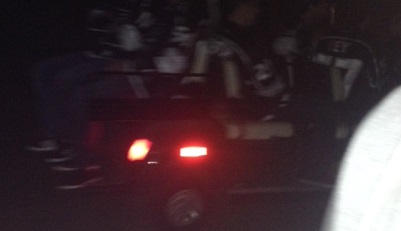 Look! It's sort of Linden Vey!

The next great challenge came via waiting in line to meet five players from the Kings for the next two hours (on top of the hour spent waiting for them to show up). We in southern California are great at waiting in lines. The 5 freeway. Starbucks. Disneyland. Weed dispensaries. We are pros. Well, most of us at least. The girl behind us waiting was confused, impatient, and drunk (off one beer! What a pussy!). I will now retell the conversation she had (abridged for your sakes) on the phone for a whole fucking hour.

"I can't wait to meet Nolant!" This was repeated several times. With the extraneous "t". T-Swizzle however swore she was saying "Nolaned".

"What do you mean they are trading Richards and Regehr?! For what?! The Canucks?!" (e4).

"Richardson and Carter still got two years left on their contracts. Why would they not be here? They got five years left!" Huh?

"Brianna made out with Benny! Then she made out with Bobby! Then she was making out with Chris! He's moving to Kentucky and HAS A GIRLFRIEND. She even made out with Alfonso. I was all, 'Not cool, Brianna. You shouldn't be doing that.'" This was by far the most intriguing aspect of the night, and I spent a large portion of the night figuring out how I could possibly get in touch with this Brianna.

"If the players had fucking left on time and weren't being lazy we wouldn't be waiting still." Way to go guys.

"I have an ordained priest with me so I can marry Richards! God my feet are killing me. Waiting in heels sucks." Richards only dates the classiest of skanks. Your poor feet hurt? Richards won't put up with that shit. 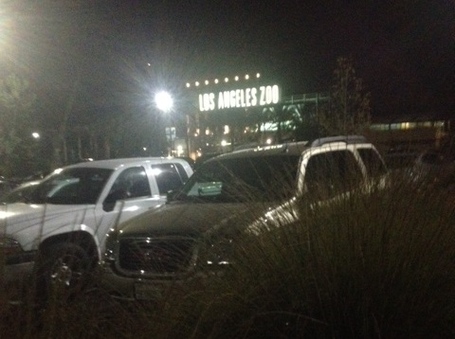 Whoops. Who says that Kings fans aren't the best in all of hockey?

Anyways, after another hour of listening about that little slut Brianna, we were just about at the Kings players. Where were they at exactly, if not at the gorilla exhibit? Well... 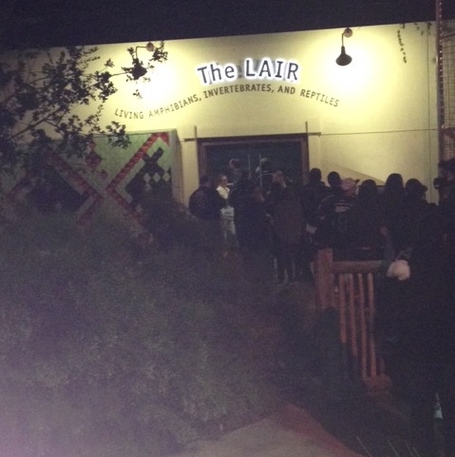 How appropriate. Anyways, the moment was soon at hand. Clifford and Richards had the look that they really preferred to be just about anywhere else in the damn world then at the L.A. Zoo signing crap for hundreds of people at ten at night. Jordan Nolan(t) had the strained smiling look of being on a date where the other person repeatedly farted while you pretend to not notice. Drew Doughty seemed to be enjoying himself, though he also reeked of whiskey. Finally, I was face to face with the Zodiac killer Dwight King himself. I had all the other guys sign my lucky special unfortunate Derek Armstrong jersey. I got to Mr. King and pulled my jersey back.

Me: "I got something different for you to sign actually."

Masterful opening words if I do say so myself. I pushed the picture forward. Dwight King took a moment to examine it. He laughed briefly. No, it wasn't a picture of a dead body.

Dwight King: "So this was you?"

I really hadn't counted on this. Dwight King had already seen this before. Anyways, there comes a point where accepting responsbility seems like a great idea, but when you have Dwight King staring you in the face asking if this bit of insane work was your doing...well, blaming it on someone seems like a better call.

It's not like Dwight King could kill me right there. Though if something happens to me you know who is responsible.

King: "Man. How long did this take you?"

And just like that, I am way more creepy than Dwight King. Time to play it off.

Me: "Ha, uh, yeah, I guess I need to get out more. Had to entertain myself I guess."

Okay, fine, I made that last part up. 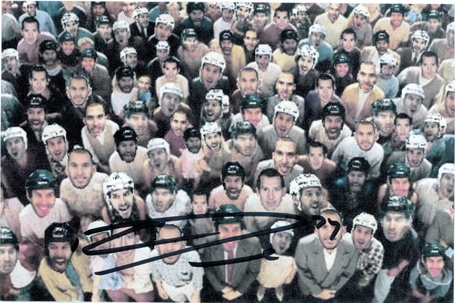 The San Jose Sharks have been one of the top teams to start this season. The Sabres beat the Sharks, which I am pretty sure makes Buffalo one of the premier teams in the NHL. What's worse is that the Sabres acquired the ultimate weapon against the Kings: Matt Moulson. In five games against the Kings Moulson has put up three goals and an assist. Seeing how the Kings have enjoyed getting torched by former players, I'm not thrilled with this match-up. Especially given how the Kings came off of a particularly crushing loss to the Predators last time out. Additionally, after starting the season without any injuries the Kings are now without Jeff Carter, Jarret Stoll, and apparently Matt Greene. Which does have perks since it looks like Tyler Toffoli, Linden Vey, and Alec Martinez will all be in (hopefully).