I'm not sure what the Buffalo Sabres and the phrase "illegal immigration" have in common, but I want to find out. Sabres @ Ducks.

What do the Buffalo Sabres have to do with articles on "illegal immigration?" I have no clue.

But Google Correlate has found a pretty strong link.

Google Correlate is a tool that lets you "enter a query [...] to find search terms that have a similar pattern of activity." For example, if you typed in "turkey," you can find that almost an identical amount of people are searching for "stuffing" at any given time. When less people are searching for the word "turkey," there's also less people searching for "stuffing." In November every year, the two terms spike in an identical fashion. The reason for this is obvious of course, and I'm sure the search pattern for the word "Thanksgiving" also correlates.

But not all correlations you find on Google Correlate are as obvious. I typed in Buffalo Sabres and eliminated every hockey related correlation (such as "Sabres hockey") in order to find out what Sabres fans are in to besides just hockey. The first non-hockey related result I found was... odd: 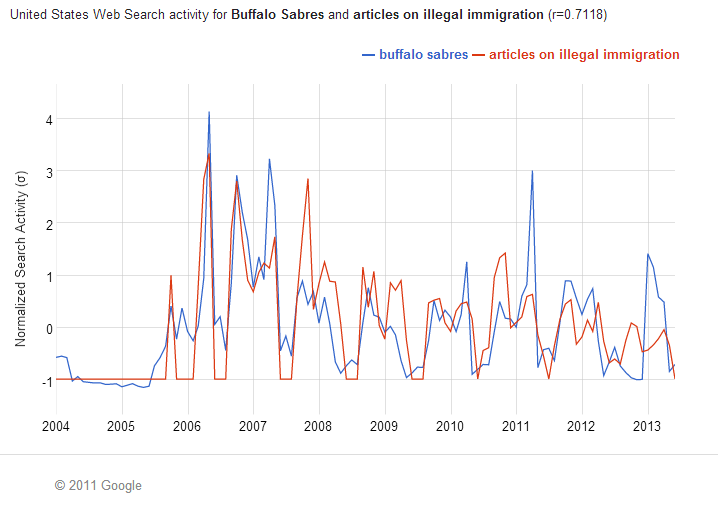 I'm not sure what to make of this. My first thought was that Buffalonians must be so miserable in their crappy city that they're looking for anyway out. Being too poor or too stupid to actually leave Buffalo for a bit, they've never seen that the US has more to offer. They believe their only escape is to leave the country, and they're all using Google to search for ways to become undocumented residents of foreign countries. Unlike Ryan Miller, who has traveled the States and knows that America has much more to offer, these people just don't know better.

That was all I could come up with, but I know it's important to consider other people's viewpoints. So I brought the Battle of California brain trust together to figure out what they think the correlation is.

Question: How do you think the Buffalo Sabres and the phrase "illegal immigration" might correlate!?

only all those rotten illegal canadians sneaking into the US

they wind up in Buffalo and run right back

This one is plausible. But only the part about leaving Buffalo as soon as you get there.

Question: What do you think might be the correlation between the Buffalo Sabres and the phrase "illegal immigration?" I'm trying to do some investigative journalism here.

We know that Sabres fans won't ever shut the fuck up about this perceived injustice, so this is also a pretty solid explanation.

Question: What do the Buffalo Sabres have to do with the phrase "illegal immigration?" This is a serious journalist question I'm asking you.

I wouldn't be surprised if Steve Ott moonlights as a coyote, or "otter" as they're known by the Canada-US border

Rudy with a similar line of reasoning to Dunn, only much more coherent.

Question: How do you think the Buffalo Sabres and the phrase "illegal immigration" might correlate!?

Um those homophobic idiots Lenny Palumbo and the other guy write about the Sabres and have probably written really awful stuff about immigrants.

This, I imagine, must be the correct answer. It's probably safe to assume that just about every idiot in Buffalo is as big of an idiot as Lenny Palumbo and Frank Parlato ("that other guy"), whom Meg has written about in depth in the past.

His articles are so important that if you do a Google search for Lenny Palumbo, Meg's article is the first result, and a similar search for Frank Parlato has a Battle of California high in the results as well.

When the Sabres leave the building after the end of the game, Ryan Miller hides in the bathroom and lives out the rest of his life hiding throughout the Honda Center, never having to return to Buffalo.

The Ducks and Sabres play a regular season game in Helsinki, Finland on 10/7/2011. Anaheim falls to Buffalo 4-1.