Which San Jose Sharks are married or dating someone? You can find all your answers here.

I've been a hockey blogger now for more than 27 years, and over all the time I've spent researching my award-winning articles, I've noticed something weird.

Check it out for yourself: 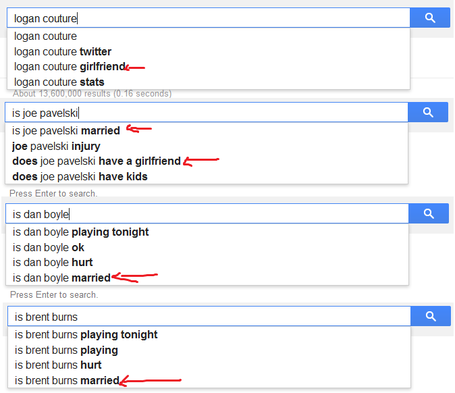 Something like this comes up on Google for MOST hockey player names. How many people are checking on Brent Burns' marriage status? Apparently a LOT.

Who ARE these mysterious Googlers? I have a few theories.

I'm willing to bet this is the dominant force behind the Google prominence of these questions. There are some women out there who spend a whole lot of time thinking about hockey players for reasons other than Corsi, and some of that time is spent imagining what it might be like to date and marry those players. These women Google Dan Boyle's marriage status because in their minds if he is married then that is the reason they won't be able to date him.

I'm not an expert, but my belief is that gay guys Google player relationship statuses for slightly different reasons than lonely straight women. For gays, I think it might be less about "oh Joe Thornton is married already so I guess he won't date me" and more like "oh Joe Thornton isn't married or dating any women so he might be gay! Awesome!" If I'm wrong about this though, I hope to be corrected in the comments (preferably in a sassy fashion).

Marleau says he's just researching a book, so don't worry about it okay?

Since this is such a hot topic, I've decided to capitalize on it. I've done all the research for you, ladies and gentlegays. Here is a list of all the current San Jose Sharks and their relationship statuses, according to the best information the Internet has to offer:

Mike Brown is MARRIED, according to an interview he did in 2008 in which he mentions the names of his Cocker Spaniels but not his wife.

Adam Burish is PROBABLY SINGLE, but it's under debate on the super-creepy Hockey Girlfriend forum, which seems to be nothing but cruel women insulting each other and hypothetical player girlfriends:

No you're not...blonde hair doesn't make you beautiful...more often than not it makes you stupid, fake and plastic. That's never hot.

Brent Burns is MARRIED, according to interviews and Wikipedia. His wife's name is Susan and they have two kids. 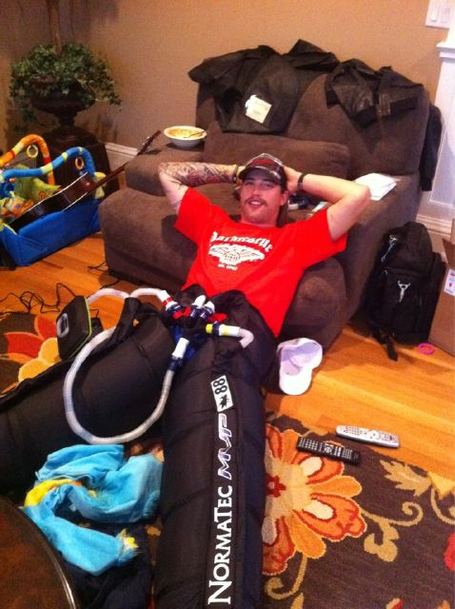 Logan Couture is SINGLE. There are no references to a wife or serious girlfriend on the web, and here's what the creepy Girlfriend forum folks had to say:

he texts my best friend and asks her to come over all the time. and talks to her so in appropriately . so if the blonde is his girlfriend... that's unfortunate. shes definitely getting cheated on

Andrew Desjardins is MARRIED. An article on Mile High Hockey from 2012 refers to him as a newlywed.

Freddie Hamilton is PROBABLY SINGLE. He's pretty young and there's nothing about a wife or girlfriend online.

Marty Havlat is MARRIED. His wife is named Ivana and they have at least one child. Also, from the Girlfriend forums:

Marti get married? Ha! His 'gf' is going to cling to him forever so he may $olve all her family problems abroad.. she is an overweight has-been and he is .. let's just say.. not what you would expect (if you know what I mean)

Jesus, what the hell is this garbage? This is seriously upsetting.

Tomas Hertl is DATING A LADY. She was at that 9-2 rout of the Rangers, remember? This is her on the left: 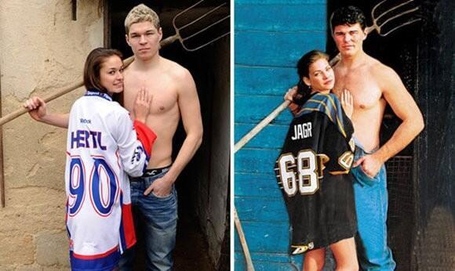 Tyler Kennedy is PROBABLY DATING/MAYBE ENGAGED TO A LADY. I don't mean that she's "probably a lady," I just mean that it's tough to find recent reports confirming it, but it seems like Kennedy was dating this woman from a mattress commercial at some point in 2013.

UPDATE: I have received word that Tyler mentioned his engagement in an interview last week, so that settles that.

Patrick Marleau is MARRIED to a woman named Christina, according to Wikipedia and other sources. They have three sons and a fun-looking dog: 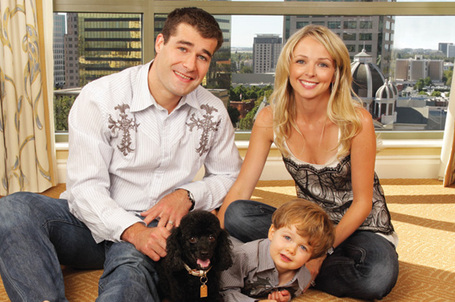 John McCarthy is MAYBE SINGLE BUT WHO CARES? There's nothing about a girlfriend or wife anywhere, but that might just be because nobody cares about John McCarthy.

Matt Nieto is I'M NOT SURE, BUT I ASKED HIS MOM ABOUT IT ON TWITTER.

Joe Pavelski is MARRIED to a woman named Sarah. They have a son named Nathan.

James Sheppard is SINGLE I THINK. Let's check in with the Girlfriend forum and see what they have to say about James:

I am sure he doesnt tell his family if or who he sleeps with but really pucksluts like you girls want to think he is no innocent. he probably does do some questionable things once in a while but who doesnt. Let the kid play hockey and don't name call anyone.

you are all very silly. i grew up with james and maybe he is sleeping with 10 or maybe even 16 girls but i ask you, honestly, if you were him ( which i wish i was) i would be taking some fine minnesota puutang peeace! FlyersAAA

I saw him with a tall brunette after his game friday. I believe her name was Jess.

Anyone could hook up with him. He isn't picky. Don't try to like him because he will break your heart. He is just a good time. Can't really hold a convo though. So a good time in bed I guess.

he hangs out with this girl name lauren alllll they time.

This is the worst forum I have discovered since I did my research into chewing tobacco.

Joe Thornton is MARRIED TO A WOMAN, regardless of what Rudy might think.

Raffi Torres is MARRIED to a woman who went along with his blackface idea.

Correction! Tommy Wingels is ENGAGED to a woman, according to my sources. Sorry ladies.

Dan Boyle is MARRIED to a woman named Amber. They have a daughter named Eastin (possibly named after the hockey equipment company) and a son named Wesley.

Justin Braun is DATING the daughter of former Blackhawk Tom Lysiak. Her name is Jessie and she was on Season 4 of MasterChef in the U.S. Here are some pictures of the couple.

Jason Demers is SINGLE, as far as I can tell. The horrible people on the Girlfriend forums have their own opinions, but I'm too disgusted to even link to them anymore.

Scott Hannan is MARRIED. His wife's name is Kristina, according to Wikipedia.

Brad Stuart is MARRIED. His wife and kids live in San Jose, and they're part of the reason he wanted to be traded back to the Sharks.

Marc-Edouard Vlasic is MARRIED. His wife is named Martine.

Antti Niemi is MARRIED. His wife is named Joanna, according to the website playerwives.com, which was WAY less helpful in all this research than you might think.

Alex Stalock is DATING A LADY. He stayed in her brother's house while recovering from surgery.

And that's it! That's the relationship status of every single player on the official Sharks roster! I hope that was enlightening for you, and I hope I've helped to save some Googling time for all the lonely women and gay guys and Patrick Marleaus out there who care about these details.

If we've learned nothing else today, at least we've established that the folks who comment on that NHL Girlfriends forum are some of the biggest assholes in the universe. Get your lives in order, you hateful monsters.

Prediction: Apparently the Sharks are horrible now, so they'll probably lose by like a billion.

Video Gamery: My 51st-favorite video game is Ghouls 'n Ghosts. It was a very realistic game because sometimes you would get cursed by an evil wizard and you would turn into a pathetic worthless duck for a while who couldn't do anything good for anybody.