Ah, the lovely city of Winnipeg...What? The game tonight is in Ottawa. Yeah, I know. But we're talking about the white as snow Peg city of Winni. And that, for really no justifiable reason at all, the Jets left winger Evander Kaner is on the market. Rumored at least. The Kings are certainly in the market for another winger to bolster their depth, which on the left side is a little concerning to look at. Adding Kane's name to the list would be a huge addition, which at the moment includes Dustin Brown (not bad), Dwight King (could be better), Kyle Clifford (fourth line material), and Daniel Carcillo (spot starts at most).

Linden Vey and Tyler Toffoli have added some nice depth at the center and right wing spots, but the left could use a bump. Does this mean the Kings should bail on Tanner Pearson to get a deal done? I'd say sure, but Dean Lombardi can be pretty reluctant to make moves just to make moves. Especially since the Kings are playing pretty well right now. The goaltending spot is deep right now also (or is at least temporarily hot), and the Kings have a ton of bottom six players that are solid two-way players. Meanwhile the Jets have guys like Chris Thorburn, Jim Slater, Eric Tangradi, and Matt Halischuk.

But if you are Winnipeg, which I am glad I'm not, why are you even trading Kane? He scores, hits, and has the best advanced stats on the team. His contract is pretty manageable, especially given the talent, $5.25 million for the next four seasons after this one. He's only 22. Sure, trade him. For a franchise and fan-base that had the "RACIST" label slapped on them (for laughs or for conspiracies), this doesn't seem to alter that view.

So what do the Kings need to do to emancipate him? My proclamation: Every player going to Winnipeg needs to be white. So that takes Alec Martinez, Dwight King, and Jordan Nolan off the table. Robyn Regehr is the prototypical lumbering white guy Canadian teams love, but he's also listed as Brazilian so that complicates things. Trevor Lewis is from Utah, which is extra white points. Matt Frattin looks like he was dipped in bleach, and is certainly expendable. As for a goalie to include, Ben Scrivens went to Cornell, and that campus radiates Caucasian. Walking by, one may feel the urge to invest in various stocks, diversifying your portfolio while you listen to some Bruce Springsteen. 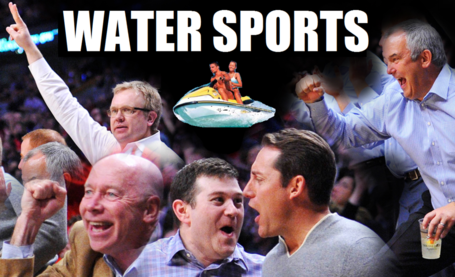 You can't trade Mike Richards or you will make Jeff Carter unhappy. Brown? Maybe, but then you are sort of dismantling the limited depth you are trying to add to. Jarret Stoll is a possibility, given his larger contract up for another year. My guess...

Kane (and Montoya if Scrivens is part of the deal)

Ideally, this is just Kane and Montoya for Jonathan Quick, but I don't think that's going to happen. And the only reason I want Montoya is just to make sure Jean-Francois Berube is well down the depth chart.

Since Matt Greene is back in action, might as well utilize the guy. I'm all for trying seven defensemen out, with Martinez getting offensive zone starts and power play time while Greene gets the opposite with defensive starts and penalty killing. Then just rotate Kopitar, Vey, Richards, and Carter with the fourth line. What do YOU think?

After constantly telling the Maple Leafs and their fans that the advanced stats of shot attempts were important, the Kings blew all that up. Despite being a top team in that department, the Kings got dominated by Toronto, yet still won. Just trolling more teams around the league, I guess. Woohoo!

I have nothing to say about Ottawa because they aren't important..

Prediction: Kings dominate the game yet don't score more than once, and lose 2-1.