Tis the season to be buying a lot of crap, and the NHL marketing machine knows this as well as anyone. Seeing how I bought a jersey from NHL.com fifteen years ago or so I have been on their mailing list, and like clockwork I receive the Shop.NHL.com Catalog every December. So if you have been struggling to find a good gift or need some ideas, for your significant other, friend, or stalking victim I am here to help. 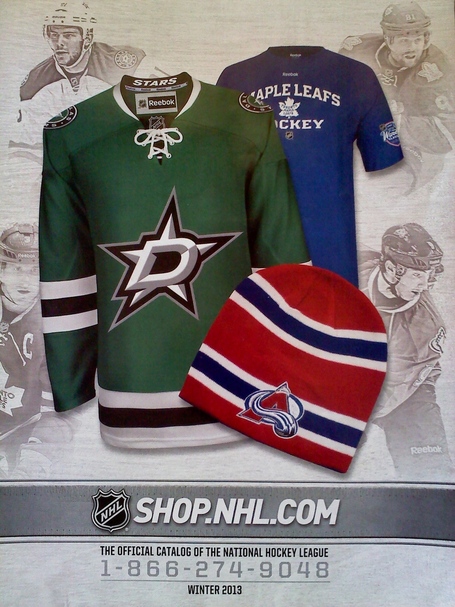 Dallas AND Colorado leading things off? Toronto was an obvious choice, but having the Stars green starfish front and center is an odd choice. Still, it's red and green colors! Festive! 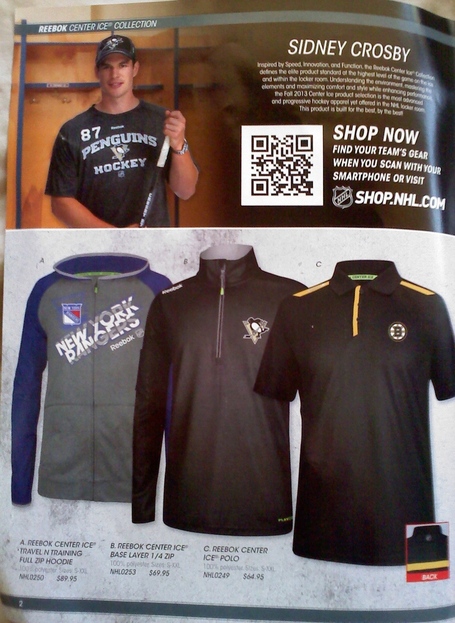 In case you forgot about every single hockey player ever, Sidney Crosby is here to remind you that, yes, he is indeed a hockey player, too. So now that we have established that hockey is still in existence and Sidney Crosby wears NHL products, what should you buy? How about a team polo shirt so you can look like an asshole at games OR the office? 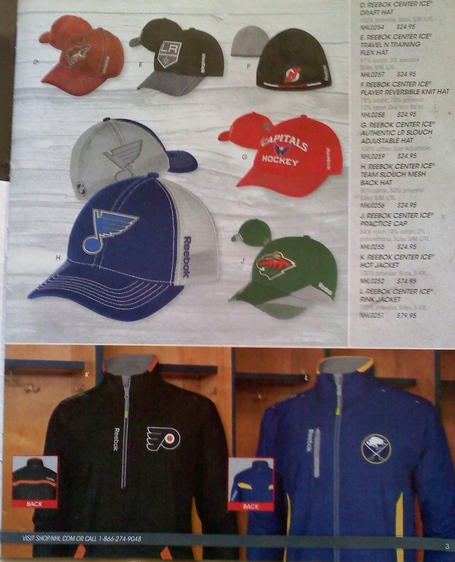 Ah, hats! Everyone loves hats! Would you care for an Inception styled Coyotes hat? A static television set inspired Kings hat? Or perhaps a hat labelled a "slouch" hat so you can have your lazy ass marketed. Dustin Penner probably has a collection of those. The Minnesota hat is dubbed a "practice cap", for those who I assume that are still working on their hat wearing skills. 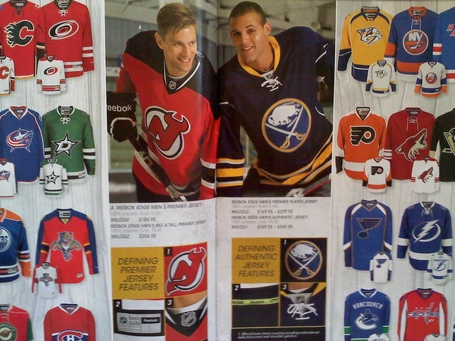 Jerseys, jerseys, and more jerseys. Get the Devils jersey for your dashing, roguish James Bond villain looking friend. Get the Sabres jersey for your friend with a big face and different skin tone. Hockey isn't just for white people, you know. 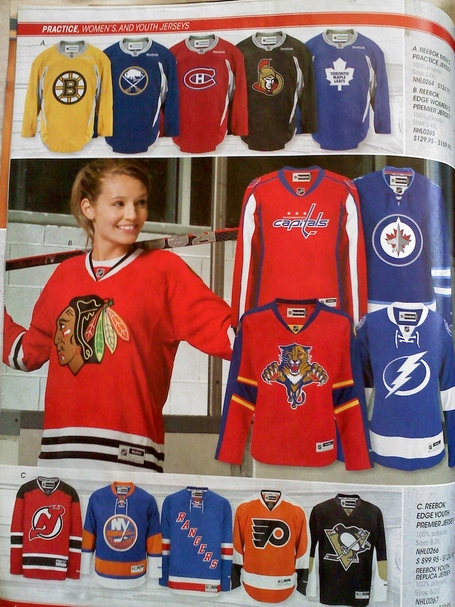 Do you know females? Kids? Eastern conference team jerseys only for them though. You don't want to surprise them with an entire other half of a continent. Carolina is oddly absent, and everything is divided by the former three divisions of yesteryear. Way to stay on top of things, NHL! 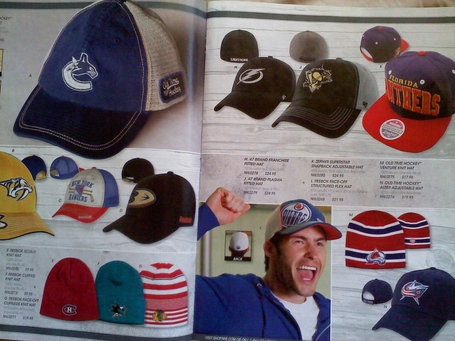 Always wanted to be the first overall draft pick in the NHL? Now you can pretend to be one with this Edmonton Oilers hat! Except you're excited about being in Edmonton. Force that enthusiasm! 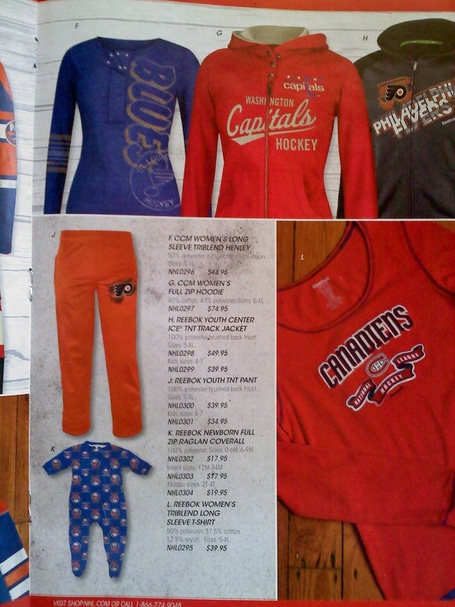 More women and kid stuff! Apparently females only wear hoodies and woman-cut jerseys. Kids though get a whole array of things. Like bright orange pants! Or full body pajamas! P.S. Jer make sure you get my full body pajamas in a large. Cool, thanks. 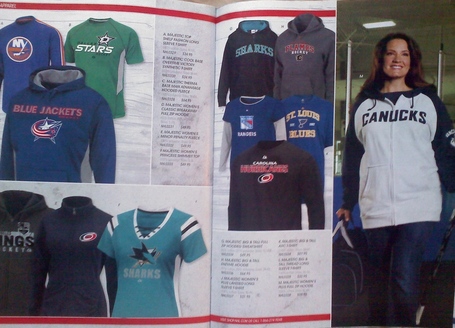 If you are a woman and you aren't wearing a sweatshirt you best rethink things quickly. 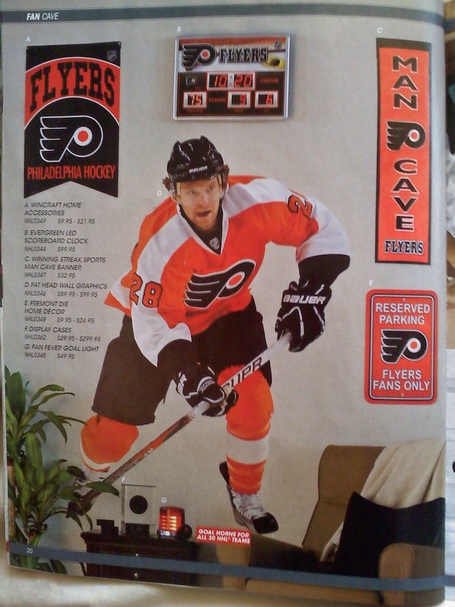 Is the person you are buying for completely deranged? Is it really you that you're buying for? Nothing says complete loneliness and "virgin" like having the words MAN-CAVE applied to your room with a large decal of a guy slapped up on your wall. Sex is overrated anyways. 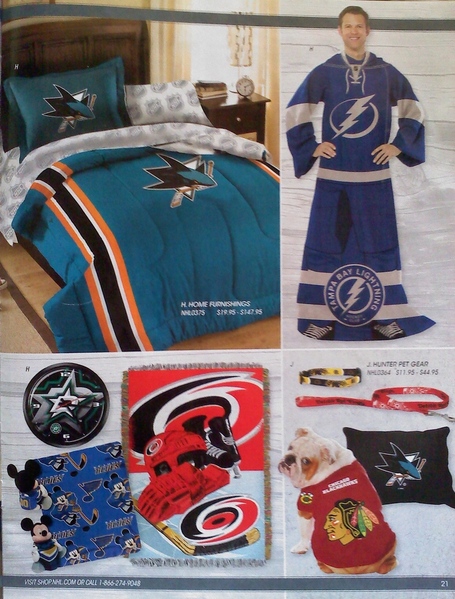 The products on this page are labelled as "home furnishings", which really must mean "weird crap". A team jersey Snuggie not strange enough? How about Mickey Mouse sporting your team's colors on a pillow? Let everyone know about your love life with your Sharks themed bed. You are getting in, but you are certainly finishing early, leaving people completely unsatisfied. 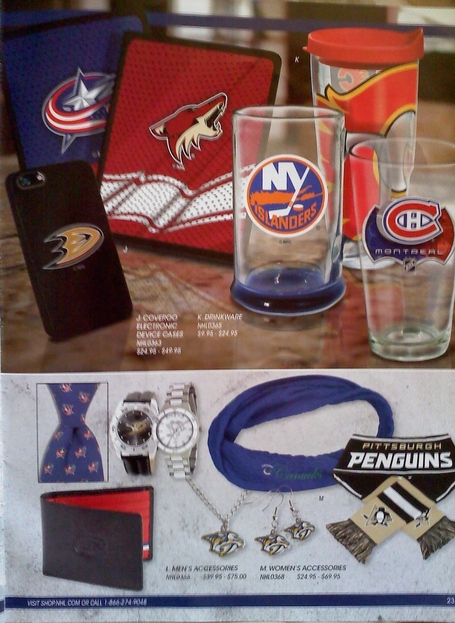 Want to make sure your wife/girlfriend leaves you promptly? Hockey themed jewelry is here for you. After you demolish your relationship, ruin your career with NHL neck ties! Mayor Rob Ford was such a trend setter with his NFL ties. As you drown your misery with a couple of O'Doul's, check the time on your Ducks wristwatch and be reminded that it's time to kill yourself.

Okay, so now for the actual important stuff: Which teams were featured the most. The final numbers for the catalog per team are sort of surprising. Surprising in that the teams with the most coverage were the Penguins and the Sharks with eight mentions apiece. Looks like shop.nhl.com has their early Cup Finals predictions in. The low team? The Ottawa Senators with only three items featuring their logo. The Kings only had four products, and the Ducks had five. The other not surprising fact was that the Eastern Conference was in the catalog a lot more then the Western teams. That also doesn't include the Winter Classic spread, which the catalog subtly added so you don't forget about that game. If I didn't know any better I'd say the NHL was only interested in the outdoor games for the money. Anyways, the Flyers had seven products, excluding the Philadelphia centric full page. Add that on and they crushed everyone with fourteen items. Along with the national coverage they receive if you ever hear a Flyers fan whine about not being featured enough by the league, kick 'em in testicles, provided they have any. If not, ask if they would like a sweatshirt. Last thing: 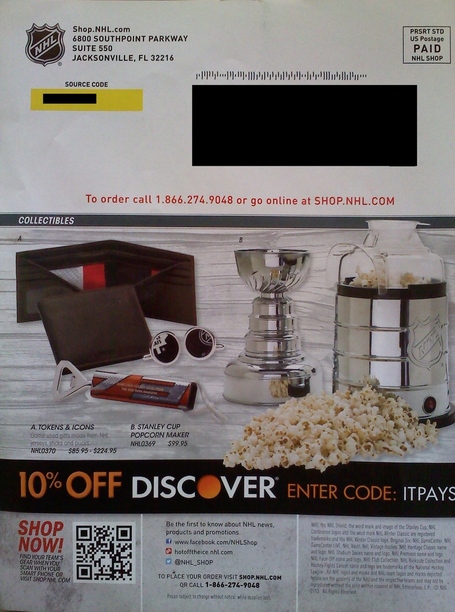 Shipped from Jacksonville? Well, I think I know where Bettman is planning on expanding the league to. Also, a hundred bucks for a popcorn maker?

After what seemed like a long-ass road trip, the Kings are finally back. It was a tough trip, er, well, kind of. Eastern Canada is pretty bad at hockey, but two back-to-backs can be pretty tough physically. Especially when there is an Ottawa to Chicago immediate trip required. Still, getting out of a four game swing with six points isn't bad. Chicago is still really good, and the Kings running on a fumes was a recipe for disaster. Poor Ben Scrivens will never see the light of day after that game though. He should have had that second goal, but I'm not going to hold him solely responsible for a turnover by Muzzin and a wide open Hossa in the slot. Or for a cross ice feed on a penalty kill and snipe by Sharp. The team looked bad. Unfortunately in addition to the loss Willie Mitchell got hurt back in Ottawa by that clown-dick Chris Neil. So did Colin Fraser in Toronto by Frazer "shockingly still in the league" McLaren. Somehow Linden Vey still isn't playing. Oh well. At least it means more Alec Martinez. Now the Kings are at home and rested up a bit against the not-so-good Edmonton Oilers. Naturally, the Kings will probably look like shit.