Sharks Gameday: A Farewell to Donald

I'm leaving behind my full-time job and with it the most infuriating co-worker and friend I have ever known.

Share All sharing options for: Sharks Gameday: A Farewell to Donald

For the past five years in my full-time, day-to-day, pay the bills job, I've worked very closely with a guy named Donald (not his real name). Our jobs allowed us to basically just work on our computers while we talked all day long - or argued all day long, as was often the case.

Donald and I argued about politics, religion, movies, and, perhaps more than anything else, sports. Donald is primarily a basketball fan. Before I began working with him, I'm not sure he had ever MET a serious hockey fan before.

Even though he isn't a hockey fan, though, Donald was never shy about making grand pronouncements about the sport. He'd say some stupid bullcrap thing, I'd disagree, and then we'd argue about it all day long. It was awful, but it was also great. His crazy views forced me to re-examine my own beliefs about hockey and sports in general, and our discussions led to some fun posts along the way - so for all of that, I have to thank him.

So long and good luck, you stubborn son of a bitch.

Here are the essential Donald-related posts, for your reading pleasure:

Why the Devils Must Not Win the Cup - The grand introduction of Donald and the bet I made with him that the New Jersey Devils wouldn't win the Cup...which I came WAY too close to losing.

Take That, Donald! - In which I took reader suggestions for what to do with the single dollar I won from Donald in our bet.

Donald Was Wrong Update - I decided to frame the dollar in our workspace, like so: 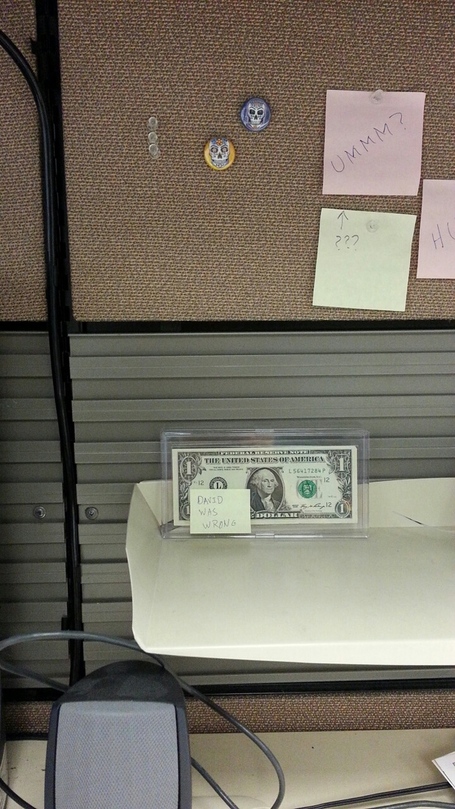 Is Wayne Gretzky a Genius? - Donald loves to use words in weird ways, and it drives me crazy.

Keep Your Head Up, Donald - Donald thinks hitting in hockey is dumb and bad.

So I guess he's not ALL bad.