Look at this dumb plan from some dumb idiot to break up the greatest state in the union into six shitty states.

Since we're playing in Washington, DC today maybe we can talk about the geographic makeup of our nation.

A plan to breakup California is being introduced by idiot tech investor Tim Draper. This is not the first time someone has proposed breaking California up, though usually it's a simple Northern California vs Southern California idea. Draper however is suggesting that California become six separate states, as shown below: 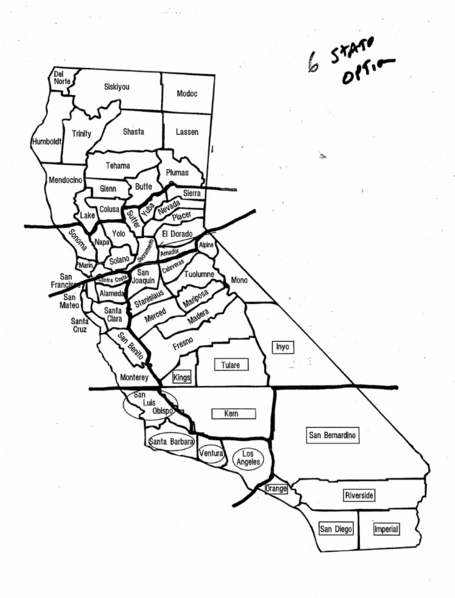 It only takes a few seconds of looking at this map to realize what Draper is doing. Upset that California is a blue state, he's found a way to isolate the most populated areas (and therefore left-leaning) and separate the less-populated, right-leaning areas, making sure that these lesser-populated areas outnumber the two populated areas where most Californians live, and give the less populated areas a disproportionate amount of say in politics in the form of representation sent to DC. Because if you can't get a majority of people to buy in to your out-of-touch ideas, simply break up the state to get more real estate that will be able to send your cronies to congress.

Draper, in much less words, pretty much admits that this is the reason for his proposal in his "5 key reasons" found in the article linked above, though he puts quite the spin on it. His fifth reason, however, is baffling:

Is it currently difficult to move around within California between the areas that would become new states? Is it harder to move from say, Los Angeles to Anaheim currently than it is to move from San Bernadino to Arizona? How does making a new state make moving easier? Shit, do I need a new driver's license just to move from San Luis Obispo to Monterey? It took me like two years to update the address on my driver's license when I just moved one town over, but now I might need to take a driver's test to? This makes moving much harder for lazy assholes like me.

The arrogance of this plan is stunning, but Draper is grasping for any explanation that obscures that fact that this is just a rich idiot making a political power grab. Fortunately for all of us this plan is dead in the water; Draper would have to collect enough signatures from Californians, get state legislature approval, and then get US congress approval. It's not going to happen.

The Battle of California is safe from this corrupt investor, everyone! Fear not.

Though it would be pretty great to have the Kings and Sharks the fuck out of my state, I guess.

The Anaheim Ducks are broken up into six separate teams. All but two of them lose to the Capitals.