Share All sharing options for: Sharks Gameday: All Apologies

The Holiday season is a time to let go of old grudges. To forgive and forget. To look towards the future, and not the past.

But fuck that noise, I'm still not over the Dustin Brown / Tomas Hertl thing.

Tomas Hertl was a wonderful, magical young man. He was a fantastic player, spoke hilarious English, and brought an element of fun and enthusiasm to Sharks games that was incredibly refreshing. He was everything the team needed and everything I as a blogger wanted to write about.

When Hertl first broke onto the scene everyone, including Kings fans, was caught up in the excitement. His talent was undeniable, and his joy for the game was infectious. Hertl is exactly the kind of player the NHL needs.

And now he's basically dead, thanks to a fat idiot named Dustin Brown. 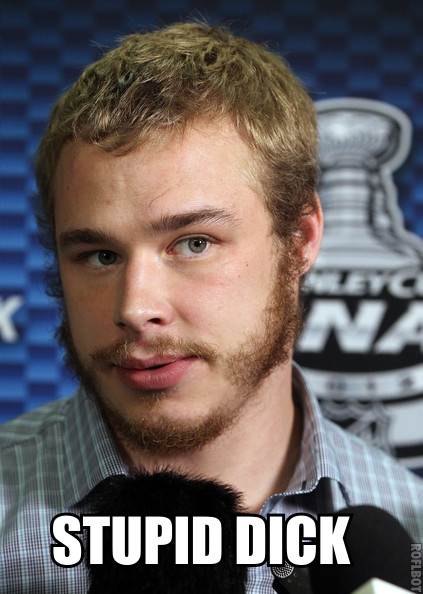 To make matters worse, the entire Los Angeles Kings organization seems totally unconcerned about the evil perpetrated by their captain. Even if they don't want to admit that Brown hurt Hertl on purpose, because they're cowardly liars, they should at the very least have the bare minimum, Raffi Torres-level human decency to express regret for what happened, and concern for Hertl's health.

But nope. Not a word from any of the Kings. Not even a shitty "Sorry your guy got hurt by accident" non-apology. Dustin Brown hasn't reached out in the slightest to the child he seriously injured. He's probably been too busy making excuses and riding the stationary bike (an activity I'm sure uses all of his limited brainpower).

This silence on the part of the Kings has gotten Sharks' GM Doug Wilson mad - and he's not the only one. Some kind of apology for what happened obviously wouldn't change the facts of the injury, but that's not the point. It's about concern for your fellow human beings, and regret for an incident that may have serious consequences for a bright young star's career.

But maybe I'm wrong. Maybe apologizing isn't the right thing to do here. To gain some perspective, I did some research into famous historical apologies. Here's a list of some folks who DID have the decency to apologize - and who are therefore, in some sense, more compassionate than Dustin Brown.

The nation of Germany in general, their medical community, and actual former Nazis have all issued apologies for the horrors of the Holocaust and World War II. I'm not trying to say that Dustin Brown is WORSE than a Nazi, exactly - but he certainly doesn't look very good in comparison to all these apologizing Germans.

Speaking of the Holocaust, the Catholic Church has apologized for not really doing anything to stop that while it was happening. They've also apologized for that whole "abuse of children" thing a couple of times, which is very nice of them. They even apologized for being big jerks to Galileo, and even though that apology came 350 years after Galileo's death I'm sure he would have appreciated it, if he weren't already burning in hell for his heresy.

So you see, Dustin? It's not too late to apologize to Hertl.

#3 The guy who wrote "Battlefield Earth"

You may not know his name, but you probably know his crime. J.D. Shapiro wrote "Battlefield Earth," one of the worst movies ever made, and wrote a whole funny article apologizing for it. He blames a lot of other people for what happened, and explains that he only got involved in the first place because he was trying to have some sex, so it isn't exactly a PURE apology - but I can't stay mad at the guy who wrote "Robin Hood: Men in Tights."

In 2008, the U.S. government officially apologized for the terrible crime of slavery and the Jim Crow laws which followed it. This apology came far too late to be any comfort to the vast majority of people who were directly victimized by slavery, but it's just another example of how important it is to actually express regret for what happened when you do something wrong.

So come on, Dustin. Do it. Show some heart, some compassion, and some god damn leadership. Apologize, you stupid fuck.

God I hate you so much.

Video Gamery: My 45th-favorite video game is all the classic Megamans. The villain of the series, Dr. Wily, apologized for all his wrongdoing in Mega Man 9 - so that makes him less evil than all of the Kings.