Someone really needs to knock Chicago down a peg.

At one point, the San Jose Sharks were playing pretty awesome and hadn't been beaten in regulation, then the Ducks came around and put a stop to that. San Jose has been doing pretty awful ever since.

I imagine we'll do the same to the Blackhawks, similarly unbeaten as of yet in regulation. Except that, of course, the Ducks have barely managed to show up for the past two games, failing miserably against the Dallas Stars in the crap hole of a state that is Texas, and barely backsliding into a victory against the St. Louis Blues in a game that neither team deserved to win.

Maybe the new weird shit Bruce is trying out with the line combos will wake the team up, or maybe the Blackhawks will finally falter something awful (or maybe just get a little too complacent thinking Anaheim will be a pushover - even though the Ducks are second in the West right now). I'm not sure how it will happen, but it'd go against natural law if the Ducks aren't allowed to knock a second team off of their no-regulation-losses high horse. 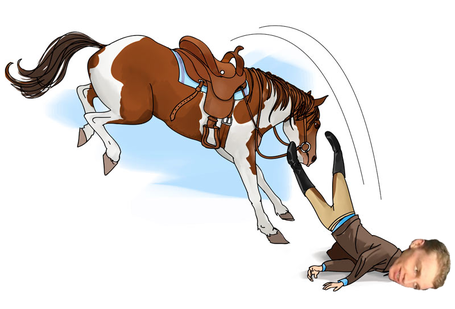 Stupid Patrick Kane falling off of his stupid high horse.