Greiss has a new mask, and the Sharks have a huge opportunity.

"Our enemy is fear. Blinding, reason-killing fear. Fear consumes the truth and poisons all the evidence, leading us to false assumptions and irrational conclusions."

Before we talk about anything else, I'd just like to make sure everyone saw this picture of Thomas Greiss's new mask that Kevin Kurz posted on Twitter: 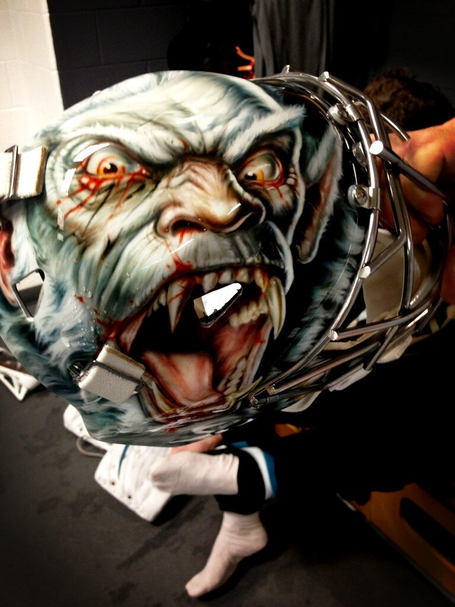 Wow that's great. I don't even know what it is, and I love it. It looks like some kind of crazy bat/human vampire creature? Or maybe a wendigo? Alright, works for me. What does that have to do with the Sharks? Fuck you, that's what.

The Sharks have yet to win a game in February. The Blackhawks have yet to lose a game in regulation this year. A recipe for disaster for San Jose? No. It's an OPPORTUNITY, folks.

As I said in my answer to one of Jer's stupid questions yesterday, the Sharks are going to be just fine. Only one loss in their six-game skid was a clear victory game (defined as a victory by more than one goal, excluding empty-netters). Antti Niemi hasn't given up a single goal in his last two game's worth of regulation time. The Sharks still have Joe Thornton on the team. The goals will come, and so will the victories.

San Jose's current losing streak has set up a perfect moment of sports drama tonight. Wouldn't it be exciting and surprising and perfect if the Blackhawks get their first regulation loss at the hands of the Sharks? It would totally blow up all the narratives people have been trying to build. People would have no idea whether to say the Sharks suck or they're great again or they really have been great all along but they were just getting unlucky or they are horrible but they got lucky tonight or -

Yeah, it would be nuts. It WILL be nuts. Because it is more than likely going to happen tonight. Because sports is all about drama. The rules of drama dictate that the Sharks end the Blackhawks streak tonight - and you don't fuck with the rules of drama.

Today's book is actually a trilogy of books: The Monstrumologist series. This series is about a young boy apprenticed to a monster-hunting scientist in the late 1800s. The books are classified as "young adult" books but I have no idea why - they are full of challenging and often archaic vocabulary, they contain subtle references to literature and philosophy that few young adults would understand, and, most importantly, they contain some of the most gruesome violence of any books I've ever read.

I highly recommend these books to everyone, but especially fans of monster horror, black humor, turn of the century science stuff, or child protagonists routinely subjected to injuries and trauma...though I guess if that last detail describes you then you're probably just a freak who should be seeing a doctor instead of reading books.

-Rick Yancey, The Curse of the Wendigo