A Sharks fan speaks to a therapist.

Megalodon's Complaint: A disorder in which strongly felt optimistic and reasonable impulses are perpetually warring with extreme pessimism and cynicism, often of a perverse nature.

Where do I begin, Doctor?

I feel like I'm going insane. Or perhaps I have been insane all this time, for years and years, and I am only now becoming aware of the reality of my own lack of sanity! Would it not seem like an insane act to some outsider, to some being unfamiliar with our concept of "sports", for my happiness to be so inextricably linked to the athletic performance of a group of men I have never met, and to whom I have no real connection? What is "sane" about cursing at the television when a little disk of rubber hundreds of miles away from me moves into a spot of which I don't approve? Why do I do this to myself? Why do I CARE?

The National Hockey League not only sanctions gross and unfair relations among men, but it encourages them. Now, can that be denied? No. Rivalry, competition, violence, deception, all that is malignant in human character is nourished by the system. Goals, victories, Stanley Cups--on such corrupt standards as these do hockey people measure happiness and success. Good Christ, a team without a Stanley Cup is an AHL team, and will remain an AHL team till they finally win the Cup.

I am marked like a road map from head to toe with my disappointments. You can travel the length and breadth of my body over superhighways of anger and pessimism and fear. Last year's abject defeat by the Blues. The heartbreaking losses in the Conference Finals. The trauma inflicted by Anaheim. These things have nothing to do with me, not really, but they have SCARRED me.

I am an intelligent man. I do my best to maintain the proper perspective. When times are hard, I remind myself of the power and influence of Luck, and tell myself that thing will get better in time. But what if? What if things DON'T get better? Luck evens out in the long run, sure, but some teams are just BAD! What will I do if it turns out that I have attached my ego to a team which is now a BAD TEAM? I've been down that road before, and I don't want to do it again, Doctor. I don't know if I CAN do it again.

I might not have the strength to stick it out. Every successive loss increases the volume of the whispers in the back of my mind, telling me to turn into a total cynic, a self-hating Sharks fan, a bitter bastard who hates the team he once loved for how it has disappointed him. Or! Or even WORSE than that, even worse than a turn for the dark and angry would be for my feelings to simply fade away. To have suffered through so many heartbreaking losses and frustrating struggles that I can't bring myself to care anymore, one way or the other.

So why don't I? What's stopping me? Is it simple inertia? Or am I afraid of what will happen if I step away from the team - afraid they might finally WIN? That would be perfect, wouldn't it Doctor? I finally stop caring, stop letting these men stomp on my heart, and then the payoff finally comes - and I don't get to share in it. I have paid the price year after year, and if I didn't get to share in the reward, well...

Well that would be the final, ultimate disappointment from the San Jose Sharks. But I won't let that happen. I won't let them do that to me. They aren't going to deny me my share of the prize when it comes, God damn it! I've come too far, given too much, felt too much pain.

You hear me, Sharks? I'm not going anywhere! Do your worst! Lose every damn game from now until the end of this bastard half-season, and I'll still be right here, shouting and spitting in your faces, cursing and telling you that you're horrible, worthless disappointments.

Because I CARE. Because I am a FAN.

Prediction: A win, a loss...what does it matter? 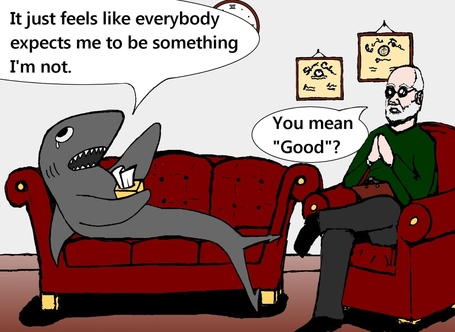 This cartoon is the best part of this gameday post, and Mako drew it and came up with the joke.