Kings @ Ducks, and while Dunn tries to argue that Mary Kate Olsen is somehow better than Ashley Olsen, I simply offer you the truth you already know.

Kings fans, as we've all known for quite some time, are petulant children. Despite finding some recent success, Kings fans remember that for the majority of their existence, the Kings have been miserable and useless. Their flash in the pan success sits atop nearly half a century of failure.

So of course, in some collective display of "little man" syndrome, Kings fans go after teams like the Anaheim Ducks. A team that was able to solidify success so quickly in their franchise history, foregoing decades and decades of failure. The fever-pitch of Kings fans' insecure jealousy is deafening. Unfortunately, it's impossible for LA fans to express this deep longing to just add up in a way that isn't childlike obnoxiousness.

The good news, for more mature fans of teams like Anaheim and many others in the league, is that it's really hard to care all that much about Kings fans. They can't really get under your skin, because you always have the reminder in the back of your head that those fans simply won't be around for long. As soon as the Lakers or Dodgers are playing reasonably well (and/or the Kings return to their true awful form), suddenly all of LA has once again forgotten they even have a hockey team. Sure, there are some die-hards that will stick around (and some of them even manage to be decent people!), but no one would ever even pretend to make the argument that the die-hard minority is representative of the Kings' fanbase (as opposed to the fat, belligerent slobs that have become so emblematic of the franchise).

At any rate, the Kings fans' burning desire to be comparable to Anaheim would almost be flattering, if it weren't so pathetic.

Pathetic, much like Mary-Kate Olsen, a coked-up pillhead dying for relevance and attention. Have you seen her bullshit acting in the otherwise respectable show Weeds? She's a train wreck. She plays her role like a fucking caricature of a 20 year old trying so hard to come across as "bohemian." The character has potential, but it's all destroyed by Mary-Kate. Wasted potential? No wonder we have a Kings fan over there defending her.

Speaking of Kings fans, let's talk about insecurity. Surely you've all heard of Mary-Kate's battle with anorexia. Look, MK, we all get that Ashley is the hot one and that you can never compare, but we feel sorry for you that you thought that was the only way you could make up some ground. It's pathetic and gross.

While Mary-Kate was desperately seeking the spotlight for fame and fortune in order to pay off her drug habit, Ashley realized that, as she was worth over $100 million dollars already, she didn't need to pander for love and attention. She was happy with the great success she had accomplished. She didn't need to whore herself out for publicity.

Meanwhile MK is still trying in vain to make it. Mary-Kate and Ashley Olsen used to get all kinds of awards for their acting. You notice when Ashley stopped, the awards stopped coming for Mary-Kate. Ashley was her crutch, and she can't make it on her own. 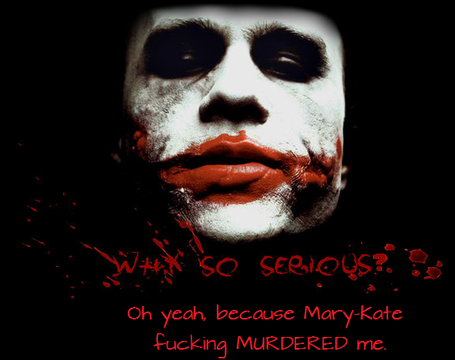 All of this could be forgiven, maybe, had that drugged-up dope fiend not been directly responsible for Heath Ledger's death (uh, allegedly, or whatever). Ledger had more going for him than MK would ever have, and like a jealous Kings fan, would not stand for it.

If you support Mary-Kate Olsen, you're supporting murder. You're better than that.