You shall go no further, Blackhawks.

Yeah, you tell her Picard.

The Blackhawks coughed up a two-goal lead in the final minutes of the third period on Tuesday night and just barely managed to emerge with a shootout victory, but it won't matter to the record books. By moving beyond regulation time the Chicago Blackhawks tied the 2006-07 Anaheim Ducks as the only teams in NHL history to go 16 games to start a season without a regulation loss. And the job for the Sharks tonight is to see to it that they stay tied on that record.

The Sharks have played the Blackhawks somewhere around ten times in the past three days - or at least that's how it feels - and the Blackhawks have won every time. The first game was close, the most recent was not. But the Sharks have put their losing ways behind them now. In fact, San Jose hasn't suffered a regulation loss in the past seven days! That's a pretty solid record right there for the Sharks, and don't bother telling me that the team has only played one game in the past seven days - I am not interested in your negative attitude.
The choice for the Sharks tonight is simple: appear in the night's highlights as the team that allowed the Blackhawks to claim sole possession of this unbeaten-in-regulation-to-start-the-season record...or appear in the highlights as the team that stopped them. The team that said NO MORE to Chicago.
I'm not sure how Ducks fans feel about this - do any of you care enough about this record to cheer for the Sharks tonight? Or does it not matter anymore because the Blackhawks already tied you guys, so the record isn't special anymore? Or was the record just dumb in the first place?
Today's book is Gates of Fire, by Steven Pressfield. This book is SO GREAT you guys. If I was doing this favorite books thing in order then this would be near the top, just outside of my top ten. Rudy is dead so he can't back me up on this but he read it too and totally agrees with me.
Gates of Fire is the story of the Battle of Thermopylae, which you already know the basics of if you saw 300, but this book manages to be both more historically accurate than that movie (which isn't a tough thing to do) and a million times more awesome. If you like history, historical fiction, military history, military fiction, or anything at all that is awesome you should read this book.
Prediction: If you read Gates of Fire you will enjoy it and thank me. Sharks win 3-1! 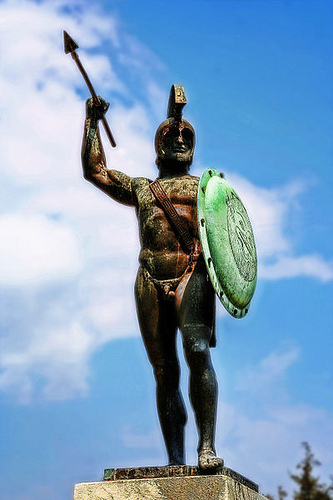 "Nothing fires the warrior’s heart more with courage than to find himself and his comrades at the point of annihilation, at the brink of being routed and overrun, and then to dredge not merely from one’s own bowels or guts but from one’s discipline and training the presence of mind not to panic, not to yield to the possession of despair, but instead to complete those homely acts of order which Dienekes had ever declared the supreme accomplishment of the warrior: to perform the commonplace under far-from-commonplace conditions."