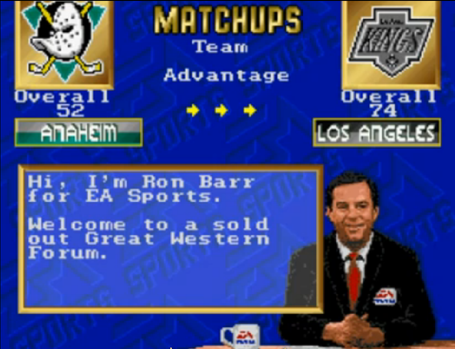 Welcome to a sold out Staples Center, home of the Los Angeles Kings.

Hi, I'm Ron Barr for EA Sports...And in goal tonight, Viktor Fasth for the Ducks and Jonathan Quick for the Kings.

Hit the start button to begin. Use the A and C buttons to cycle through matchups.

Lately Anaheim has been playing extremely well...Let's take a look at tonight's matchups!

Anaheim enters its first NHL season with a line up that will have no trouble skating with the opposition. They have an experienced and mobile defense so they should be able to clear the puck out of their zone without too much trouble. They don't have much firepower up front so they'll have to check the other team closely, make few mistakes, and get strong goaltending to stay in the game. Terry split four years between the NHL and the minors before earning a full time job with Hartford in '93 where he produced 53 points. He can serve as an offensive sparkplug for a team because of his awesome shot and hunger around the net. Give Terry lots of playing time and make sure he's out there on the power play. Randy is an 11 year veteran who loves defending his own zone. He has been a consistent performer over the course of more than 700 NHL games. Randy is an experienced defender so use him to clear players away from the net especially when your team is shorthanded. Alexei is a veteran of many years with the Soviet National Team and Central Red Army Club. He has 3 NHL seasons to his credit and has become used to the NHL style of play. Alexei is a great playmaker, use his agility to create scoring chances and defend his own zone. Guy has performed well for 2 seasons as the back up goalie for the St. Louis Blues. No stranger to pressure, he briefly replaced Curtis Joseph during the overtime of a '93 playoff game against Toronto and immediately made a key save. Guy has good overall skills so give him lots of playing time so he can show his stuff. Troy is a 10 year veteran who contributed to 2 Stanley Cup winning teams in Pittsburgh. He is an experienced role player who knows what it takes to win in the NHL. Put Troy on a checking line where he can throw his 6' 3" frame against the other team's leading scorers. Anatoli has demonstrated in his 3 NHL seasons that he can be an effective two-way forward. The ex-Moscow Dynamo star is a fine skater who can handle a heavy workload. He easily switches from offensive to defensive roles, use him as much as you can on both the power play and penalty killing units.

The Kings have a team whose combination of young defense and veteran scorers along with solid goaltending took them to the 1993 Stanley Cup Finals. The offense still revolves around Wayne Gretzky, but there are a number of forwards who can score. The defense is young, strong and improving. The most dominant player of his time, the Great One still has plenty of magic left. Coming off an outstanding playoff performance, number 99 should be ready to go for the new season. Gretzky can play and dominate the game in any situation, take advantage of his agility, stickhandling and passing skills. Marty McSorley is a tough hard nosed defenseman with big a heart. The consummate team player, McSorley will get involved in the action from the opening face off - team McSorley up with Blake, and count on him to shine at both ends of the ice. Rob Blake is one of the league's emerging young stars. His combination of size and speed along with his "crash and bang" style make him one of the top blueliners in the NHL. His offensive skills are good, but he excels at checking opponents out of the play. Kelly Hrudey saved his best for last in 1993, when he led the Kings to the Stanley Cup Finals. He has played most of his team's games for the past 9 seasons. Kelly has good concentration, and quick hands, so look for the big glove save. One of the most gifted players in the NHL, the electrifying left winger has always been among the league's top scorers. Last season he set an NHL record for most goals and points by a left wing. Get the puck to "Lucky Luc" as much as you can - his shot is the most accurate on the Kings. A dynamite, fast flying right winger, Tomas Sandstrom is one of the game's hardest shooting forwards. Sandstrom's grinding style of play agitates opposing players and coaches - use Sandstrom's aggressive forechecking to pick up the puck, or his accurate one-timer to find the net.

(Thanks very much to this amazing site for making this easy.)