The plan for next season's realignment has been revealed, and the new mini-conferences need names.

The NHL realignment plan has been tweaked a bit since it was originally floated back in 2011, and over the weekend the new details came out via Elliotte Friedman of Hockey Night in Canada. Here's a visual breakdown of the four new mini-conferences: 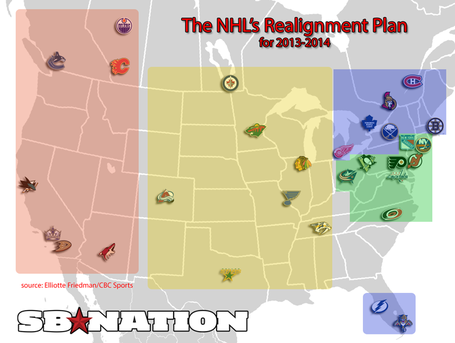 Let's go through these conferences one by one, examine the teams within each, and see if we can come up with some suitable names.

Analysis: The Pacific division loses only Dallas, which is really a case of addition by subtraction, and welcomes half of the Northwest division into the fold.

Biggest winner: The Sharks, who go from being the Western-most team in the pacific to a nice, centrally-located spot in the new conference.

Biggest loser: Vancouver. No more padding your stats with games against the Wild and the Avalanche, you bastards. Welcome to California.

Analysis: Winnipeg escapes the southeast and joins a portion of the Central division and the bastard children of the Northwest and Pacific.

Biggest winner: Chicago, who loses one of the best teams in their division (Detroit) and gains four crappy teams.

Biggest loser: The Jets. I guess the new conference will be better than their old division, but Winnipeg is a loser for plenty of other reasons.

Analysis: The Red Wings finally move east and join three other Original Six teams. Then the Florida teams get thrown in to the mix for some reason.

Biggest winner: The Red Wings prove to everyone that if you whine and bitch and moan long enough, people will finally give you what you want just to shut you the hell up.

Analysis: The Atlantic division welcomes some refugees from the Southeast and the Columbus Blue Jackets.

Biggest winner: The Blue Jackets will get to play a bunch of games against some of the biggest NHL markets in the league.

Biggest loser: Every other team not in this conference, who will actually have to get on a god damn plane instead of just walking from one conference game to the next.

Overall, the realignment seems like a good deal for the vast majority of teams in the league, and it should work out wonderfully for a year or two until the Coyotes and the Florida teams fold and we have to re-do everything all over again.

"The other part of me wanted to get out and stay out, but this was the part I never listened to. Because if I ever had I would have stayed in the town where I was born and worked in the hardware store and married the boss's daughter and had five kids and read them the funny paper on Sunday morning and smacked their heads when they got out of line and squabbled with the wife about how much spending money they were to get and what programs they could have on the radio or TV set. I might even get rich - small-town rich, an eight-room house, two cars in the garage, chicken every Sunday and the Reader's Digest on the living room table, the wife with a cast-iron permanent and me with a brain like a sack of Portland cement. You take it, friend. I'll take the big sordid dirty crooked city."

Prediction: Sharks win 8-3, finally scoring now that half of their team is injured or suspended.