Niemi vs. the Blackhawks: was letting Antti go the right move for Chicago?

The Sharks lost a frustrating game to the Ducks last night, but at least my bands are trouncing Jer's (the poll is still open for the rest of the day, if you feel like casting a vote for the winning side: mine), so there's still some light left in the world.

Tonight we will get to see which of the two best teams in the NHL so far will win the first of their three match-ups this season - all of which happen during the next three weeks. This game is the only one of the three which will take place in San Jose, so the Sharks will need to make the most of their home ice advantage for the one game against Chicago in which they have it.

Thomas Greiss played against the Ducks, so Antti Niemi will start tonight for San Jose. If you're a young Sharks fan (like, less than three years old) you may not remember this, but Antti Niemi actually used to play for the Chicago Blackhawks. In fact he even won a Stanley Cup with them, way back in 2010. Crazy, huh? That was before the lockout of course. No no, not the 2004 lockout, it was AFTER that one. Before this last one, I mean.

Antti Niemi won the Cup and then the Blackhawks didn't want to pay him what the arbiter said he deserved, so he went to play for the Sharks. At the time, reactions to Niemi's departure by Chicago fans were mixed. Two full seasons have passed since it all went down, so now's a good time to take a look back and see if we can answer the question: was letting Niemi walk away the right move for Chicago?

Using stats from Behind the Net, I took a look at 5 on 5 save percentage (the best measure of goalie skill) going back to the 09-10 season, Niemi's first real season in the NHL and the year he won the Cup with the Blackhawks. I've included the Blackhawks as a team and the Sharks as a team for comparison purposes.

About that last bullet point - Nabokov's departure and Niemi's move to the Sharks was a complicated process, and it's worth a recap. After the 09-10 playoff loss to the Blackhawks, the Sharks had to decide whether to re-sign Evgeni Nabokov, who had been paid $6 million dollars in 09-10 and, coming off a very strong year, would have been unlikely to take a significant pay cut. The team ended up saying Nobokov and added Antero Niittymaki (remember him?) and Antti Niemi instead. Niemi made $2 million dollars that first season, and is currently making $4 million.

From the other perspective, after winning the Cup the Blackhawks walked away from an arbiter's $2.75 million / 1 year contract for Niemi (perhaps in part because the Sharks offer-sheeted Niklas Hjalmarsson and the Blackhawks were forced to match, thus limiting their salary options) and took their chances with Crawford and Marty Turco (and eventually Ray Emery). Crawford performed well enough to earn the starting job, and today he's getting paid $2.5 million a year. 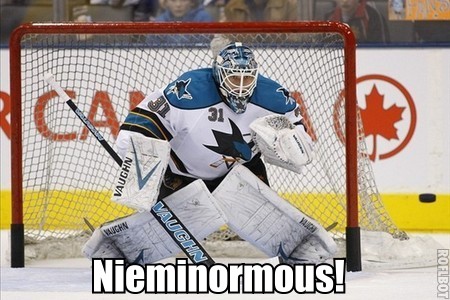 After that long, convoluted road, what can we say? Was letting Niemi walk away the right call for Chicago? I think the answer is yes. They took a gamble that Corey Crawford would be consistently "good enough" (which is all you really need from a goalie, these days, if your team is good) and it has paid off for them. They handled the salary cap crunch following their Cup victory in an intelligent way, and avoided spending unnecessary dollars on their goaltending when they had more important pieces to secure. Sure it seems a little silly that they resisted paying Niemi $2.75 million in his first big contract when they went ahead and paid Crawford $3.25 one year later - but you can't really argue with the results.

And how about for the Sharks? Well, they ended up with a goaltender eight years younger than Nabokov who had already proven that he could win a Stanley Cup. He was cheap in his first year with the team and probably gets paid a little too much now, but still makes $2 million less than Nabokov made in his last year with the Sharks. If Niemi continues to perform for the next few seasons at the same level he's averaged over the past few years (which is probable), and the Sharks never have to pay him more than $4 million per year (which is reasonable), then ditching Nabokov and going with Niemi was the right move for them, too. Cup-winning goalies are rarely available on the market right when you need them, after all. In the end, this was a move that seems to have worked out for the best for just about everyone - except for Antero Niittymaki, I guess.

Sorry Nitty - it was just a case of survival of the fittest. 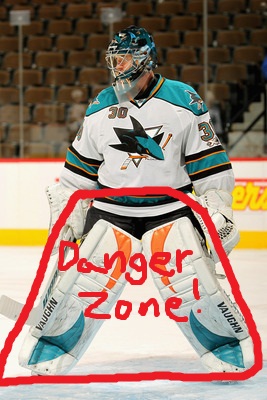 SPEAKING OF SURVIVAL OF THE FITTEST today's book is The Selfish Gene, by Richard Dawkins. Although the book is a fantastic piece of popular science writing and helped establish Richard Dawkins as one of the word's foremost evolution-explainers, its greatest legacy might actually be the part at the end of the book in which Dawkins coined the term "meme" to refer to an idea that spreads and mutates in ways similar to biological evolution. Cool, huh?

In The Selfish Gene Dawkins explains the role of genes in biological selection through the use of an analogy of a team of "oarsmen" (apparently they aren't just called "rowers"?) in a boat. It's a fantastic way to explain the gene-centered view of evolution to anyone who understands sports at all. I won't insult your intelligence by re-writing it to make it about hockey, and instead will just quote it here:

One oarsman on his own cannot win the Oxford and Cambridge boat race. He needs eight colleagues. Each one is a specialist who always sits in a particular part of the boat — bow or stroke or cox etc. Rowing the boat is a cooperative venture, but some men are nevertheless better at it than others. Suppose a coach has to choose his ideal crew from a pool of candidates, some specializing in the bow position, others specializing as cox, and so on. Suppose that he makes his selection as follows. Every day he puts together three new trial crews, by random shuffling of the candidates for each position, and he makes the three crews race against each other. After some weeks of this it will start to emerge that the winning boat often tends to contain the same individual men. These are marked up as good oarsmen. Other individuals seem consistently to be found in slower crews, and these are eventually rejected. But even an outstandingly good oarsman might sometimes be a member of a slow crew, either because of the inferiority of the other members, or because of bad luck — say a strong adverse wind. It is only on average that the best men tend to be in the winning boat.

The oarsmen are genes. The rivals for each seat in the boat are alleles potentially capable of occupying the same slot along the length of a chromosome. Rowing fast corresponds to building a body which is successful at surviving. The wind is the external environment. The pool of alternative candidates is the gene pool. As far as the survival of any one body is concerned, all its genes are in the same boat. Many a good gene gets into bad company, and finds itself sharing a body with a lethal gene, which kills the body off in childhood. Then the good gene is destroyed along with the rest. But this is only one body, and replicas of the same good gene live on in other bodies which lack the lethal gene. Many copies of good genes are dragged under because they happen to share a body with bad genes, and many perish through other forms of ill luck, say when their body is struck by lightning. But by definition luck, good and bad, strikes at random, and a gene that is consistently on the losing side is not unlucky; it is a bad gene.

A magnificent piece of writing about genetics and evolution - as well as sports and luck.

Prediction: If NHL players were genes, Patrick Marleau would be mom genes. Sharks win 3-2, with two goals from Marleau and one from Clowe.