This investigative journalism delves deep into the madness of Bronies

Do I post tickets for a game in Ohio? Sure! If you are in the area, why are you in Ohio? Go get some Los Angeles Kings tickets, and feel better about life.

A show created by Lauren Faust, which has gained huge amounts of followers on the Internet, outside of the target demographic. These fans are known as bronies. Almost any brony will tell you to watch most of the episodes before judging the show, the creator herself has urged viewers to watch "with an open mind". It is popular for it's above-standard animation, developed characters, and interesting episode plotlines. Many fans also enjoy it for the sense of nostalgia it gives them.

-Urban Dictionary entry for My Little Pony: Friendship is Magic

While this definition is no where near as memorable as that of the Mississippi Hot Pocket, Cleveland Steamer, Cincinnati Bow Tie, or even the Alaskan Pipeline it does offer a brief summary of what the fuck some people are thinking when it comes to My Little Pony. As one who casually lurked around on 4chan (regrettably) I was nonetheless shocked when MLP took off. It was the second inception of MLP so I suppose it makes it MLP Jr. It has been a huge supporter of accepting guys that like ponies, friendship, and even magic.

After watching two episodes, I felt a profound effect. Namely, that my balls were receding at an (even more) alarming rate. How the target demographic stretches beyond girls in elementary school baffles me. Maybe I just have to watch the third episode. This could be part of a trick though. Someone says you have to give the show more time and next thing you know you've watched three seasons worth, waiting and hoping, but you've already been bronied. You sit and watch the next episode wondering what is going to happen to Derpy. Yes, that is a real character, thanks to Bronies no less. On the plus side...Horse puns? All in all, I actually had to put on Spartacus to feel a little more masculine. 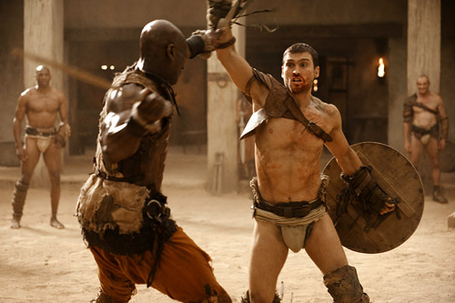 Hm. Maybe a little too masculine.

I guess what I am trying to say is that I guess I can understand Bronies. I like Adventure Time. The difference being one is about a boy and his shape-shifting dog while they run around in a land brought to life from a mind that is perma-fried, and the other is about a bunch of ponies who run around in a land brought to life from the mind of Liberace and that dude who used to get it on with horses.
Think it's just Diamondback that likes it? 346,185 people on Facebook like it. The Ducks have 204,078 fans. My Little Pony is more popular than the Anaheim Ducks by over 50%. Sure, the Blue Jackets, Wild, Coyotes, Panthers, Hurricanes, Islanders, Jets, Senators, Flames, and Predators aren't as popular as MLP or even the Ducks, but Jer doesn't write blogs about them. Shockingly, over half of the teams in the NHL have fewer fans (according to Facebook) than My Little Pony.

Further explanation into why MLP has the following it does results looking into the darkest regions of mankind. From 4chan and their MLP forums, home to all things Brony:

FAQ:
>What is ‘Flutterrape’?
Flutterrape refers to a collection of stories about the ponies from MLP trying to have sex with Anon, the only human stranded in Equestria.
While the title implies that it is Fluttershy trying to rape Anon, other ponies may follow in her hoofsteps and attempt their own versions of >rape
There are many different versions of Flutterrape, but mostly they are lighthearted stories about the ponies failing in their comical attempts to get into Anon’s pants.

Sweet venereal diseased ridden Moses. Lastly, a picture from the boards before I give up on all of this. 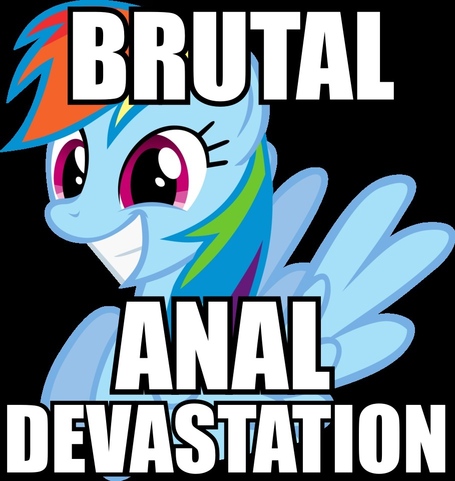 Speaking of the Kings, Willie Mitchell is almost back (again, maybe, who knows, whatever), Stoll isn't going to get anything in terms of disciplinary action because it was obviously dumb ass Fowler's fault, and they are playing the Blue Jackets. Oh boy, we get to see Jack Johnson again! Hooray! I wonder if he will try to devour Jeff Carter using his gigantic catcher's mitt type face. JJ has 3 points and is currently a -2, which puts him on pace for a career high in that category. He is also currently 2nd in the league in time on ice only behind Drew Doughty. I have a feeling Johnson probably knows this and every time his coach yells at him for a line change he just flips him off and plays through his tears.

The Kings have a tendency to play down to their competition (i.e. Anaheim), and they will really need to put on a performance to play as far down as the Blue Jackets. Hopefully Quick knows there is a game this time, the penalty kill has their success rise back over 30%, and the forwards score in this game also. Prediction: Fluttershy puts on a great game, scoring twice and setting up Twilight Sparkle for another. Wait, NOOOOOOOOOOOOOOOOOOOOOOOOOOOOOOOOOOOOO!