Friend of the blog Fake Dan Ellis has some thoughts about his former teammate's radical new hairstyle.

As you are all certainly aware, I was once on the same NHL team as Mr. Mike Smith. We were the very best of friends. While we were obviously separated by the vast, vast, VAST differences in our relative wealth, I always did my best to keep from looking too horrified whenever Mike would eat a meal with a plastic fork, drive his own car, or use hotel shampoo. We were even talking about moving in together at one point (okay actually it was more like Mike talking about it and me laughing in his face for ten minutes, but that's basically a conversation).

Eventually the two of us went our separate ways. I lived in Disneyland for a while, and then rode around in my hot air balloon until I found myself, somehow, playing for a team called the "Carolina Hurricanes," which sounds REALLY made up. Mike hitch-hiked across the country and lived as a drifter throughout the American Southwest, and eventually got picked up to play goal for the Phoenix Coyotes.

I lost track of what he was up to for a while, but then in the past few days I've become hideously aware of...THIS: 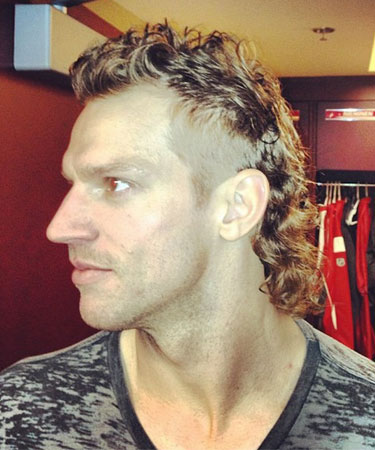 That's Mike Smith with his new haircut. The Poverty Pompadour. The White Trash Wave. The Poor-hawk.

Have you no shame, sir? No pride in your own appearance? No mirrors?

Mike Smith discussed his new "hair" in a post-game interview the other night. With the help of my loyal manservant Jeeves, I've edited the video to include my own reactions in money-green speech bubbles:

This just goes to show you, everyone, that even though our relative financial situations may have changed, Mike Smith still displays the questionable judgment and lack of taste that always characterize the lower classes.

Once a poor, always a poor.

Prediction for tonight's game:: What? You want me to try and predict the future like some filthy gypsy? I refuse.

Goodbye for now everyone, and remember to keep riching for the stars!