I knew a girl that was on the ice crew. She never got me Los Angeles Kings tickets. Bitch.

As we close in on the halfway point of the season, I have grown aware of one thing: My former hockey teammates are far more entertaining than I am. This is pretty-Hey, wait a second. Didn't this just happen? Is this some Bill Murray tomfoolery? Oh, be sure to vote between these two hunks: 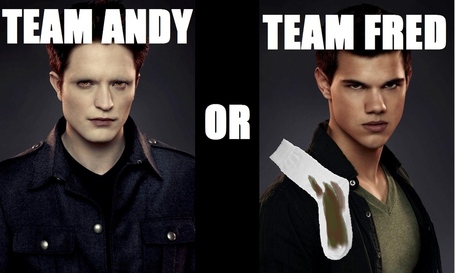 Hold on, this happened also. Right? What gives? It's the same exact opponent at the same exact time at the same spot. It's not the playoffs already, is it? No it can't be. It's the Flames. And don't tell me this game doesn't have Kelly Hrudey night. Every night is Kelly Hrudey night. This is freaking me out. I didn't realize I qualified for the "Groundhog Day" treatment. Was it because I laughed at the old lady who tripped over the curb at LAX last week? Or because I was whining about the dude in the wheelchair taking forever to get through the door at In-N-Out?

Well to hell with that! I'm not learning some lesson about being a better person, or that I shouldn't try to sleep with Andie MacDowell. Bill Murray had loads of fun in that movie, and why shouldn't I? I can rob a bank, or showoff with Jeopardy (actually, I already do that), or steal that stupid groundhog and kill myself repeatedly. What else could I do? I could get caught up on Mad Men finally. I could learn the banjo, also! The only downside is that the Kings are perpetually playing the Flames. At least they would win most of the time.

Prediction: Kings win 6-2, with goals from Carter, Lewis, Muzzin, Williams, Kopitar, and Fraser. Kiprusoff gets chased in the third.