Share All sharing options for: Anaheim Ducks Gameday: A Tale of Two Teemus

Whenever the Ducks play the Wild, there's always a lot of talk about brother vs. brother as Mikko and Saku Koivu go head to head. But what a lot of people forget is that Teemu Selanne also has a brother; a twin brother.

Granted, there's not much talk about Teemu's borther, Paavo Selanne, because his brother is not an NHLer. He's a teacher back home in Finland...

Suppose at your place of employment, you were a very competent worker, but you took every other day off. Surely your work would suffer, and people would notice. But imagine you had a coworker, equally as competent, to fill in on those days off. Likewise, when you did show up to work, your coworker would take the day off. As long as the communication between the two of you was good and the nature of your job didn't prevent such an arrangement, the two of you would probably be an incredibly productive team. You'd always be well rested, your morale would be pretty high, and the chance of you burning out on the day-to-days of your work week would be minimal. The two of you combined could easily outperform coworkers doing the job all on their own. Two competent workers suddenly become one top performing employee.

Of course, most bosses wouldn't go for this. But what if your boss didn't know? What if your boss thought you were coming every day, on time, and doing your own work. And what if your job was one in which the salary was high enough to support both you and your coworker on the income of one individual?

It's pretty obvious what I've been getting at here. What if, in your current job, you and your twin sibling were sharing the work load? Over the entire course of your career, you've been switching off days of the week. Or maybe you take a couple weeks off, then your sibling takes a couple of weeks off. Hell, maybe you're the better performer than your sibling, so you mostly do the job on your own, but your sibling is capable enough, and so every few months they step in as you go on an extended vacation. You kick your sibling a nice chunk of your paycheck for their trouble.

Sure, occasionally you both call out sick, or take a real vacation with neither of you reporting. You can't make it too obvious; everyone takes days off at some point in their career. But those days are few and far between, and your peers and superiors attribute much of your success to the fact that it seems like you've always just been around.

Strange things are afoot in the Selanne household. 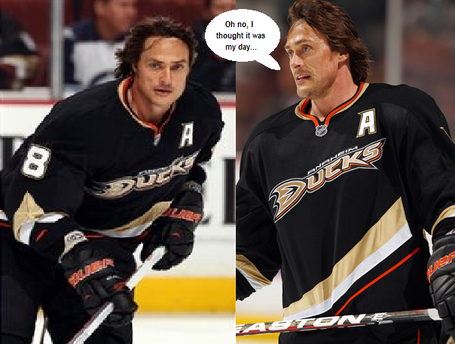 Gameday Prediction: Ducks take another win, 2-1. Paavo with the game winner in overtime.