Ten reasons why Goosebumps is better than Animorphs.

Goosebumps vs. Animorphs? Gee I wonder which one of those two things I think is better..

Ten reasons why Goosebumps is better than Animorphs

1. Goosebumps introduced a generation of children to the fun of horror as a genre.

2. Almost every single chapter of every Goosebumps book ended with a shocking cliffhanger ending, which is a great way to get children to keep reading (or hate reading, depending on the child). 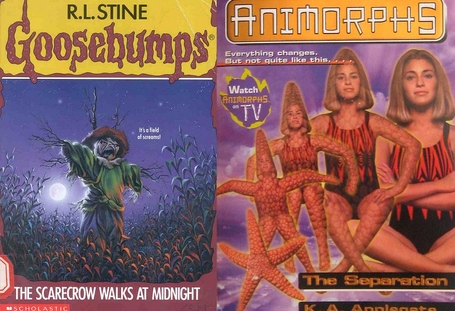 4. Goosebumps inspired this blog, which is really funny.

5. The Goosebumps TV series had the second-scariest opening to any show on Nickelodeon:

(I shouldn't even have to mention what the scariest opening on Nickelodeon was.)

6. The Animorphs series was plagued with inconsistencies that bothered me even as a child. How do the rules about thought-speech really work, K.A. Applegate?! GET YOUR STORY STRAIGHT DAMN IT.

7. According to Wikipedia, "war, dehumanization, sanity, morality, innocence, leadership, freedom, and growing up are core motifs of" the Animorphs series. Talk about major bummers! I'll stick with my books about kids turning into bees, thank you very much.

8. The Goosebumps series is still going, which is great because new generations of children can enjoy the fun.

9. The Animorphs series ended in 2001, which is great because it sucked. 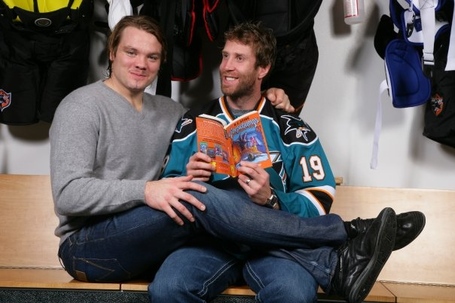 The Los Angeles Kings, much like the Animorphs books, are dumb and bad. This was clearly in evidence when the Kings played the Sharks Thursday night. Los Angeles managed 37 shots on goal, and outshot the Sharks 16 to 6 in the first period, but still couldn't win even though the Sharks are struggling, battling injuries, and don't even have players playing in the right positions. The Sharks have been absolute garbage for months now, and the Kings let them score four goals! How embarrassing.

Jonathan Quick is to the Los Angeles Kings as Marco is to the Animorphs books. He's the worst part of an awful whole, and also he's really really annoying and can turn into a gorilla.

Prediction: The Sharks take the Kings on a trip to Horrorland. Sharks win 5-2, with a bunch of points from the league's best new power forward Brent Burns.

(Today's book is Animal Farm. It's better than Animorphs, but not as good as Goosebumps.)