With the nation on the verge of catastrophe, only Alexandre Burrows can rescue us from ourselves

Share All sharing options for: Los Angeles Kings Gameday: Save us Burrows!

The game is in Canada, so their economy will at least be functioning. Los Angeles Kings tickets.

By the time you read this, it will be the beginning of the end. Our once glorious nation, reduced to something far lesser. Like a Mexico. We're already speaking nothing but Spanish, and violence is climbing dramatically. "Hola ese, tengo herpes de esto puta. Residuos de su hermano." This is not a world I want my unsupervised bastards running around in. At least not armed. And with Obama calling the shots, I won't be able to give them semi-automatics either. Damn you, Alec Martinez!

But there is one man that could save this if there's any time (there isn't). Mr. Creativity, Alexandre Burrows.

And that crazy shit nearly worked. Sure, it looked like he was having a seizure during his attempt, but no one has ever seen anything like it before. It was stupid as hell, and brand new, something that Congress only halfway completes. And it was at his team's expense. Why stop there? Make it at the entire country's expense! Who knows what crazy ideas Burrows could come up with? Hey, here's a few: 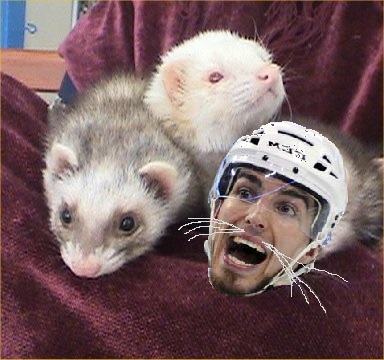 At the very least, Burrows can keep spinning until his velocity rips a hole in the Space-Time Continuum, and travels back in time. Except he won't because A) he's Canadian, and B) he's an asshole. Even if he does travel back in time he'd probably only go back to convince Tim Thomas to quit hockey and go into politics during the 2011 Finals, further fucking up the country, while the absolute worst thing possible likely happens: Vancouver is happy.

Prediction: China buys the United States and their first order of business is disbanding the NHL. They just have Kobe Bryant forever entertain them, sorta like the evil alien's plan for Michael Jordan in Space Jam.