The Ducks take on the Coyotes in three consecutive games, and Jer gets lazy.

Up above is some info about the first of three consecutive games we'll be playing against Phoenix, but it's not the only game we'll be talking about in this post.

Work at my real-life job got a little out of hand for me on Friday, and the three posts I was going to write up for our three upcoming games against Phoenix simply aren't going to come. You're stuck with this half-hearted effort instead. But I promise, it was the best series of articles about the Phoenix Coyotes that you would have ever read, with clever allusions to Jerry Bruckheimer films and road runner cartoons.

Three consecutive games against the same opponent is interesting scheduling, especially when the opponent is a division rival. The games could potentially build into a playofff-like atmosphere, and things could get a little chippy. It'll be interesting to see how narratives evolve over the next five days.

For example, what stupid shit is Shane Doan going to try and pull?

Here's some info about the second game...

To help apologize for the sloppy effort in this article that you'll likely be stuck with for the next five days (barring some crazy-but-not-unlikely instance in one of these games that demands my edgy commentary), here's an old Sleektoon for you from the BOC archives. 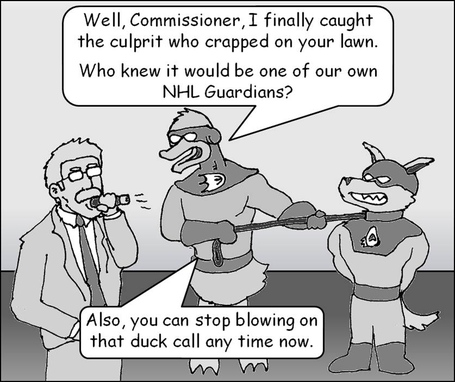 You can pretend that I drew that and not Earl.

Your admiration fuels me.

Shane Doan sure is an awful person, am I right?

Prediction: Sorry gang, through the use of advanced stats it has already been determined that it is statistically impossible for the Ducks to win another game this season. See you next year!