Did the Bettman point ruin the trade deadline?

Examining the effects of the extra point awarded for overtime losses on the standings at the time of trade deadline over the years.

Share All sharing options for: Did the Bettman point ruin the trade deadline?

Kevin Kurz (seen here looking befuddled at Brodie Brazil's use of "Picklesnake") reports on the Sharks for CSN Bay Area. He's written a detailed article discussing the different options for the Sharks at the trade deadline this year. Today I'm going to take a look at one specific point Kurz makes in the article: that the NHL's current point system, which involves awarding a standings point for each team if a game is tied at the end of regulation (popularly known as the "loser point" or "Bettman point"), has been partly responsible for a reduction in the number of big trades at the trade deadline.

This year’s deadline is on April 3, less than two weeks away, and there’s already been educated speculation that it could be another dud. The NHL’s wacky points system means more teams than ever are still in the race, and it’s not out of the realm of possibility that 12 or 13 teams in each conference will still be alive headed into the final weekend of the regular season, let alone at the deadline. Logic dictates that if you’re still in the race, you’re not going to be dealing your key players, or even your role players.

Of course, before we go any further in discussing the impact of the "loser point" on trade deadline activity this season, it's critical to point out that the REAL blame for the lack of clear "buyers" and "sellers" this year is the lockout-shortened schedule. There simply haven't been enough games played for teams to significantly separate themselves in each conference. With a little under half of the season remaining, being within six standings points of the final playoff spot isn't an insurmountable deficit - and thirteen of the fourteen non-playoff teams are within that six-point window! Florida, the only team left out of that group, is only eight points from the final playoff spot. Obviously we all know most of these teams don't have very good odds of making the playoffs, but it becomes much more difficult for a GM to justify blowing up a roster and trading major pieces at the deadline when that eighth seed looks so close on paper.

With all that said, does Kevin Kurz have a point about the effect of the loser point in prior, un-locked-out seasons? Does that extra standings point result in more teams remaining in the hunt for the playoffs around the trade deadline?

To find out, we need to look at the standings around the trade deadline over the past few seasons. We'll use March 1st as the date for all the past seasons, for the sake of consistency (prior to the 04-05 lockout the deadline often came later in March, while after that lockout the deadline was frequently in late February). Thanks to ShrpSports.com we can see what the standings looked like on that date in past years, and we can compare the seven complete seasons since the loser point was introduced with the seven seasons prior to that rule change.

If Kurz's thesis is correct, we should see more teams remaining "in the hunt" at the trade deadline in the post-loser-point seasons than was previously the norm. And since "in the hunt" is difficult to define exactly, I looked at how many teams fell within 2, 4, 6, and 8 standings points back of the final playoff spot in each conference.

Assuming it's true that GMs are less likely to trade away players who are good now in exchange for future prospects if they consider their teams to be in the hunt for the playoffs (which as Kurz says seems logical and likely) then the loser point's role in bringing more teams into that playoff hunt is at least partly responsible for the lack of activity around trade deadlines since the 04-05 lockout.

So when the April 3rd trade deadline comes around this year and it's once again a boring affair, you all know who to blame. Don't worry though - he's used to it. 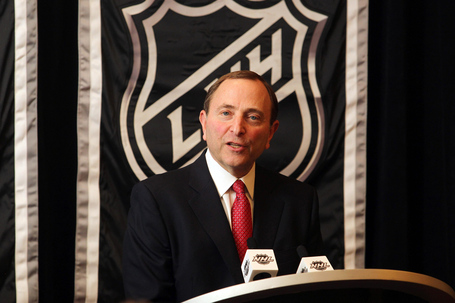 The Sharks play the Wild today, and San Jose can't afford to lose. There are too many teams in the hunt for that eighth playoff spot.

A regulation victory on the road would be nice.

“There is no secret knowledge; no one knows anything that can't be found on a shelf in the public library.” -Daniel Quinn, -Ishmael