With the Kings heading to Chicago, and then to Washington D.C. to hang out at the White House, I thought I should take full advantage of this opportunity. I mean of course getting in touch with Barack Obama. Barry O clearly isn't a big hockey guy. His people just aren't great with the cold elements. Being from Hawaii, I mean. Barack hasn't even been to a hockey game. But when you're local option is the Capitals, can you blame him? He really seems to prefer basketball. Because he is tall. Also, there is no ice in Hawaii, Kenya, Indonesia, or Saudi Arabia. Maybe if he became familiar with Nazem Kadri, he could relate to the game. They could go around together terrifying white people.

And things are worse than we originally thought. The President seems to put hockey on the same level as soccer. And not even international soccer. Professional soccer. That's a hell of a slap in the face Mr. President. What's next? Do you start hosting fake athletes? 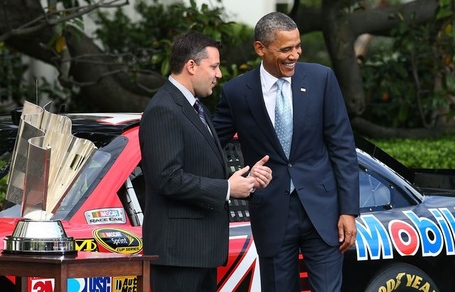 Whatever the reason behind el Presidente not going to a hockey game is, maybe the letter I sent off with Mike Magee of the Galaxy to give to Obama will convince him to give hockey a chance: 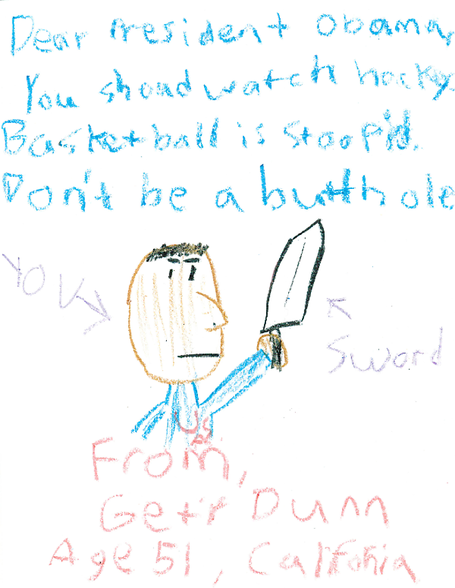 Los Angeles Kings tickets, once again in a different font.

The Kings looked even more 2012ish in their last game then in the one before, getting shutout for the second consecutive game. While it was pretty easy to guess that Jeff Carter was bound to cool off, the fact the rest of the team can't score now is pretty bothersome. The top line for the Kings, while controlling the puck and dominating play, have had no scoring as of late. This of course is perfect for Dean Lombardi to panic, and trade the up and coming Tyler Toffoli for the old and declining Jarome Iginla. So with the now mortal Blackhawks set to host, the Kings really need to break this drought, except it would have been a bit easier to score against a depleted Canuck squad, so we'll see how this goes. Also, Jordan Nolan got fined for hitting Henrik Sedin in a play I seriously don't remember. Dustin Penner's boarding of Tanev got nothing. Sounds like some racist bullshit to me Mr. Shanahan. Typical Irish.

Prediction: The Kings don't score again, but get bailed out by Jonathan Quick. They lose in overtime, 1-0. Additionally, Barack Obama drone strikes my house after reading my letter.