A Sharks fan designs a new 3rd jersey for the Ducks.

This is it, folks. The final game of the year between the San Jose Sharks and the Anaheim Ducks (until they meet in the playoffs and the Sharks win in an upset). All season long, Jer and I have been doing our best to make gamedays between our two teams special. Here's a rundown of how things have gone so far:

Obviously, my posts were better than Jer's by FAR every single time. It's not his fault, he's new.

As far as the hockey action goes, though, the season series couldn't be closer. Two wins and twelve goals for each team have set the stage for this final showdown between our beloved Sharks and the cruel, dishonest, and racist (probably) Ducks.

There have been a lot of harsh words and hurt feelings surrounding Sharks-Ducks games this year, both on the ice and here on our own blog. So Jer and I thought that it would be best to use the final gamedays of the season to present peace offerings to the opposing teams and fan-bases: we're each going to design new 3rd jerseys for the other team.

That should take care of everything, right?

Thanks for the suggestion, Earl, but I think I can do better.

You can go have a look at what Jer has designed for the Sharks here, if you're some kind of masochist.

I'm well qualified to design a new 3rd jersey for the Anaheim Ducks. Since I am a hockey fan who lives in Orange County, I'm automatically one of the Ducks' top 500 biggest fans.

Since ducks don't really have that much to do with Anaheim, I considered going with a completely different logo for my 3rd jersey design. A jersey featuring a picture of a half-empty arena, for example, would be a perfect fit for the team. I also considered using Richard Nixon's smiling face, since nothing says "Orange County" like a picture of a conservative cheating asshole.

In the end, though, I decided not to stray from the duck as the symbol of the team. It's been a proud part of their long history, and has just the right amount of embarrassing ridiculousness to fit in with everything else about the franchise.

Here is my design for a new 3rd jersey for the Anaheim Ducks: 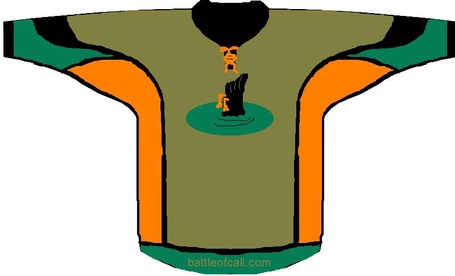 So what do you think, folks? Do you like it, or do you love it?

Today's book is The Closing of the Western Mind. It's about how Emperor Constantine ruined everything because he was a fucker.