Anaheim Ducks Gameday: A New Look for the Sharks

Jer designs a new jersey for the buttholes in San Jose

Share All sharing options for: Anaheim Ducks Gameday: A New Look for the Sharks

Tonight's matchup of the Ducks against the Sharks marks the last (in the regular season at least) that the two teams will meet in 2012 -13. Before we go any further, let's check out the Battle of California gameday posts that warmed out hearts throughout this series...

For today's final, series-deciding gameday post, Meg and I have agreed to design jerseys for the opposing teams. You can go check out Megalodon's effort here, but remember to come back here for the real stuff.

First, here's a mockup of the back of the jersey. This is not the color scheme, I'm saving those details for the front of the jersey. 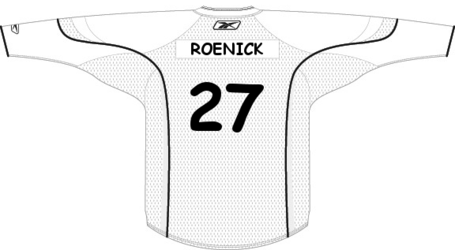 Notice the fine Comic Sans MS font, which shows the team is serious and professional, but also willing to reach out to the younger generation. We've used the team's franchise player for the sake of this mockup.

Below is the front of the jersey, in full color. The cow print is a throwback to the team's history, having spent the first two years of their existence at the Cow Palace. I've used their current colors to frame the cow print as well as in the piping. It's classy. 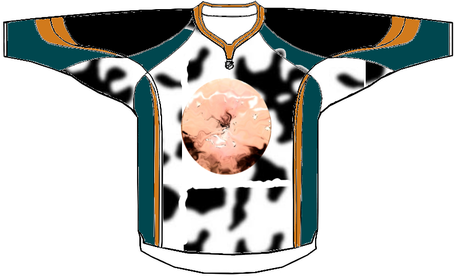 The crest, as you can see, is a puckered asshole. This is an homage to their fanbase.

Note that Megalodon vetoed my initial image for being too graphic for BoC's gentle readers. For the brave among you, you can find the original incarnation of the crest here, but be forewarned that it is very NSFW.

To keep it Sharks related maybe we put a fin shoulder patch on there or something. I don't care.

Prediction: Ducks win in a shootout.