No wonder they went broke

Well here I am at 8 AM on gameday only to find my finely crafted post completely gone. Everything else is ready except for that little part where I type a post. Go figure. So without further ado, here is me trying to recall what I had previously written.

Judging by the title of my post, I was trying to go for a Girls Gone Wild spoof. At the very least it would explain why I had this picture saved on my computer still. 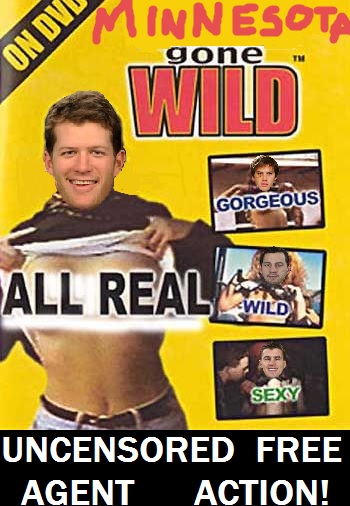 Oh the laughs we could have had. But alas, I fear most have slipped from my memory. Something about Girls Gone Wild going broke because they shelled out nearly 200 million dollars for two guys. I don't know, I'm sure the original post was plenty more humorous. In any case, that Ryan Suter is a hot number. Yowza.

Uh, what else can I say about this...shit.

So yeah, the Wild are an entirely new team this season, and kind of gave us all a lockout because of it. It's the Kings first game against them this season, and the Wild aren't exactly push overs anymore. I mean they have to be, right? The Vancouver Canucks' record isn't nearly as impressive as it used to be.

Prediction: I lose after I hurl my computer out a window in frustration, and because the Kings can't score on the power play to tie today's game.

I now leave you with a clip of Larry David ordering the late, and still legendary, Girls Gone Wild.