First and foremost, a (mostly) 100% accurate rundown of my evening last night...

3:31 to 4:58 - Sit in traffic on the 5 with T-Swizzle (the girl, if you missed it), who is visiting for the weekend. I joke that the Kings will do all the scoring in the third probably when I have to drive her to the airport.

About 5:00 - T-Swizzle says to pull the car into the valet lot where her dad works. I begin to wonder if I have cash in my pocket.

5:28 - Have duck for dinner. More Casino-like guys join us at our table.

6:02 - Break into a sweat to find the valet guys washed my car, and that I have absolutely no cash on me.

6:03 - Have the Casino guys laugh at me for having an Obama bumper sticker and no money.

6:04 - T-Swizzle's dad pays the valet. I say thanks. The valet looks at me and responds, "That's Mr. Swizzle to you, and don't forget it." I begin sobbing uncontrollably.

7:10 - Get to the STAPLES Center and receive a free hat. Things are looking up. Last time I got a free hat, Alexander Frolov scored a hat trick. Optimism cautiously rises like a groundhog in bobcat territory.

7:28 - T-Swizzle's dad apparently has a company suite. It is occupied by three large black guys, and a lot of Asian women.

7:39 - The game starts and one of the black guys asks, and with this I'm not joking, if the puck is allowed to go in the air.

7:45 - One of the women in the suite mentions she is from Arizona, and that the Coyotes are a real great team, and that she is so lucky to live out there. I scoff at her and feel how Dan Ellis must feel with us poor people.

Fuck it, you know where this going. I left at the end of the second to go take T-Swizzle to the airport. The only parts that were not entirely true were me crying uncontrollably (I only cried a little), and T-Swizzle's dad is not Robert De Niro (but he is a lot like his character in Casino. Seriously, I was terrified). Her flight also was to, wait for it, Nashville. I still have that free hat. Rush came on the radio not five minutes after I finished dropping her off. Oh Karma, you're a real stickler. I won't say what I did to deserve all that, but it was bad enough to where I even feel like I may have crossed a line, even though T-Swizzle thought it was funny (but also really, really assholey, even for me). At least the Kings won and completed the state rape.

According to everyone, the NHL has had booming attendance and television ratings are up. Of course they are. Remember that letter I edited for the NHL when the lockout ended? We are a stupid, stupid species. Don't believe me? You're reading this aren't you? The main point is, no matter what happens with how greedy, corrupt, and/or evil the owners are (or anyone that interferes with the NHL) as soon as hockey comes back on we will eat that up as fast as possible, and as much as possible. Only to then complain about how little hockey is presented to us, and how crappy the coverage is.

Yet how quickly we forget a few's greed. Instead, here we are sitting around talking about realignment and expansion. For a league that still has a few struggling organizations trying to stay afloat, adding a few more sounds like a great idea! Kansas City? Sure, since St. Louis never has any issues. And wasn't the league's revenues too small with record setting years? Split it up further!

Instead of going to four eight-team divisions, wouldn't it have made more sense to just cut two? I know we all agreed the Ducks are the best option to cut, because, and let's face it, they are just horrible people. However, to preserve California dominance over the world let's just keep them. And why stop at cutting two teams? There's plenty of extra junk in the NHL we don't need. Let's start with the most obvious and the shittiest. Phoenix is gone. No more arguments there. Let's cut out Columbus for simply just sucking forever. Why not the Devils also? A team in New Jersey with two already in New York City? Makes no sense. Or if they don't like it, they can have their owner, GM, and Ilya Kovalchuk have a death match with the Islanders and Rangers' crews. Whoever dies first has their franchise die with them. Panthers? Gone. Winnipeg? Already proven why they lost their franchise in the first place. Gone. With Texas seceding from the United States, Dallas is out. They probably don't care anyways. Six teams down, 24 left. Hey, more money for everybody else! I'm a genius. 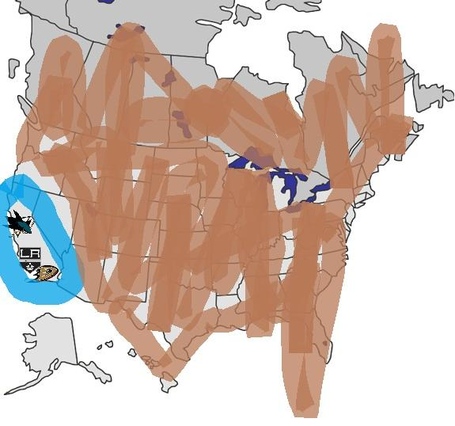 The Battle of California Division (aka, the only one that matters), and the who fucking cares? division.

Okay fine, here's a real idea: California and Canada. There's one. Colorado is stupid and out of the way. They play by themselves. Jerks. Minnesota, Detroit, Chicago, St. Louis, Toronto, and the Pedophiles get a circle jerk together. Ottawa, Montreal, Boston, Buffalo, and whichever two New York teams survive the gauntlet get another. Lastly, Philadelphia, Pittsburgh, Washington, Carolina, and the reservoir tip that is Tampa Bay in the used condom of America get the last division. 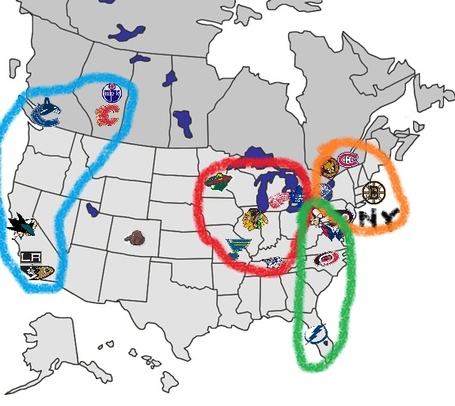 The three eastern conferences kind of looks like Gary Bettman. Or Squidward.

Prediction: I get buried in a ditch with a dying Joe Pesci.