Grading the San Jose Sharks at the halfway point of the season.

In any case, while it is all very well to talk of 'turning points', one can surely only recognise such moments in retrospect.

-The Remains of the Day, Kazuo Ishiguro

Look at this fucking shit: 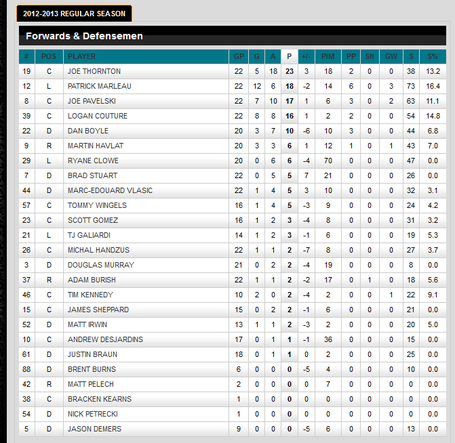 Fuck. FUCK. This is horrible.

Let's grade the performances of the Sharks thus far this season...

Joe Thornton: B+. Averaging greater than a point per game, though he doesn't score many goals.

Patrick Marleau: B+. I love you Patrick, if only for how much Jeremy Roenick hates you.

Brad Stuart and Marc-Edouard Vlasic: C. You guys aren't supposed to score, and you're both doing an excellent job of that.

Everyone else on the team except for Antti Niemi: F. You are all shitty douchebags who are terrible at hockey.

Antti Niemi: ALL HAIL ANTTI NIEMI! THE GREATEST MAN WHO HAS EVER LIVED! PRAISE BE TO HIS NAME!

Here are his stats, but be warned: to look directly at them is to glimpse pure truth and power, and it may cause your eyes to turn to gold:

Niemi's 1.83 goals against average and .935 save percentage are the best of any goalie who has played more than 1,000 minutes of hockey this season. The only other starters with better stats are Craig Anderson and Corey Crawford, and neither of them have played as many games as Niemi.

Addtionally, Niemi has faced 521 shots, the ninth-most in the league. His amazing numbers are not the result of the Sharks being a great, shot-limiting defensive team.

He was the Sharks player of the month for both January and February. He deserves to be the team's MVP for the season already, and should be in contention for the Vezina and Hart trophies as well.

Antti Niemi is having the best season of his young career, and it's going to waste because almost all of the rest of the Sharks are hurt, suck, or both. If this world was a place of justice then the next time the Sharks score two goals or less again Niemi will scream until he turns into a being of pure energy and ascends into a higher plane of existence, where goalies get to play on teams worthy of their skill.

Prediction: Sharks win 1-0, and there is no justice in this world for Niemi.