Taking a look at the playoff picture in the West and a guy sleeping in a park.

Here is a picture I took yesterday on Easter Sunday: 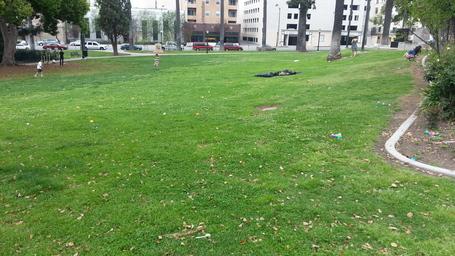 This is a park in Pasadena. The colorful objects you see scattered around are plastic eggs for an Easter egg hunt for kids, hosted by a local community organization.

Also in the picture you can see a sleeping homeless man, who did not wake up or move as children scoured the lawn all around him picking up eggs.

"A sense of wrongness, of fraught unease, as if long nails scraped the surface of the moon, raising the hackles of the soul."

Let's take a look at the playoff picture in the Western Conference.

I've omitted Calgary and Colorado, because so will the playoffs.

Some observations about how things stand right now:

Tonight's opponent for the Sharks, the Vancouver Canucks, will be looking to try and take their division lead back from the Minnesota Wild. I don't really care which of those stupid loser teams wins the final Northwest championship, but the Sharks have been playing really well lately so that's probably good news for the Wild.

Prediction: Sharks win 4-2. Goals from Pavelski, Couture, Clowe (who is then immediately traded before the game is over), and Brent Burns (now playing as a goalie).