Hockey in the West will never be the same.

Share All sharing options for: Saying goodbye to the Western Conference Red Wings

We are living in the last days.

I should probably elaborate on that.

What I mean is, this is the end of an era. This is the final year that the Red Wings will be a Western Conference team. After years of whining, the Detroit Red Wings will finally get their wish next season and will join the East. They'll be a part of the new WTF Florida? division, where they will probably finish between fourth and sixth pretty consistently for the next decade or so.

While I can't say that I'm sad to see the Red Wings leave the conference (if only to cut down on the obnoxious Wings fans that show up at Sharks games and to avoid the befuddled looks I get from non-NHL fans when I try to explain why Detroit plays in the West) it is undoubtedly a major change. The Red Wings have been a part of the Western Conference since before it was even called that. They moved to the Campbell Conference along with the rest of the Norris Division in 1981, and have been playing as a Western team ever since. That's over thirty years' and three lockouts' worth of history. 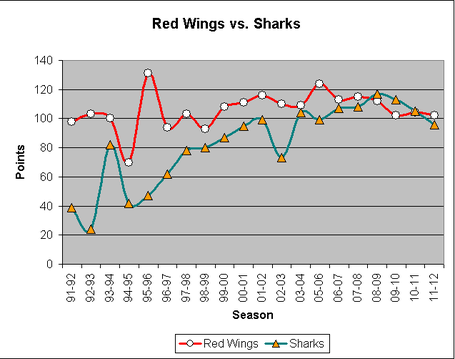 The Sharks have only finished the regular season with more points than the Red Wings three times in their history, from 08-09 through 10-11. There's a good chance they'll do it again this year, which will make four times out of twenty-one seasons that the Sharks have topped the Wings.

No team in the league has been better than the Red Wings over the lifespan of the San Jose Sharks. Detroit has been the model franchise, winning several Stanley Cups with different rosters, continually avoiding the decline so many other teams anticipated due to wise drafting (Pavel Datsyuk in the 6th round, Henrik Zetterberg in the 7th) and excellent coaching (why hello Todd McLellan), and making the playoffs every single year since the birth of the Sharks.

When the Sharks faced the Red Wings in the playoffs, which won't happen for the foreseeable future this side of a Stanley Cup final, it was always something special. Some of the biggest moments in franchise history came in these showdowns, from 1994's upset to 2011's seven-game nail-biter. Beating the Red Wings in the playoffs always felt like a real triumph for the Sharks, even in the recent match-ups when the Sharks have technically been the favorites heading into the series.

It's fitting that now that the Red Wings finally seem to be in decline they leave the Conference they ruled for the better part of thirty years. They're packing their wagons and heading East, riding off into the sunrise (god eastern stuff sucks so bad). The Red Wings have defined what a good hockey team is over the past two decades, and without them the Western Conference will be a very different place.

Congrats and good luck, Red Wings. Enjoy playing all those division games against the Panthers and Lightning. You've earned it.

"I don't mind your showing me your legs. They're very swell legs and it's a pleasure to make their acquaintance. I don't mind if you don't like my manners. They're pretty bad. I grieve over them during the long winter nights."

My ninth-favorite book is Raymond Chandler's detective masterpiece, The Big Sleep. I already wrote a gameday post honoring it in great detail, a couple of years ago when the Sharks were on the verge of being swept out of the Western Conference Finals by the Blackhawks.

Prediction: The Sharks send the Red Wings to the Eastern Conference with one last punch in the mouth. San Jose wins 5-2.