The wheels are coming off this wagon

Share All sharing options for: Los Angeles Kings Gameday: Faltering on the Trail

Growing up in California, I got to experience the many joys of west coast living. The near perfect weather perpetually, with plenty of cool things to do, and 4th grade with the Oregon Trail every Wednesday before math. I was shocked when I moved back east and people hadn't had heard of the Oregon Trail game. California's education system may have it's flaws, but depriving children of this trail blazing (pun intended) game was not one of them. What better way to spend 40 minutes of class time than to name your wagon members after your friends only to watch them die horrific deaths via drowning, typhoid, dysentery, snake bites, or shattered limbs.

In that 40 minutes the real test was to basically haul ass to Oregon before you had to go back to actual class. Essentially everyone just turned the settings to "ass-on-fire pace" so they could at least try and get to the river rafting portion near the end of the trail. Of course there were plenty of other obstacles in the way where your party members got sick, you ran low on food, and you had to decide between fording the river or being pussy. I always got within 100 miles of the river rafting and died. It was unbearable to watch. I'd have a wagon full of happy, healthy people, but as soon as I hit the Idaho state line everyone turned into the baby thing in Eraserhead. They'd be clinging to life where a slight breeze could kill them. There would be a fire one day, a buffalo mauling one of the members another, and sure enough my whole party would be dead right around Fort Hall.

Up until last year, my elementary school computer lab day's were a pretty accurate symbolic match for the Kings' seasons. Anze Kopitar busting his ankle was the back breaker the season prior to the Cup run. Back in 2010, a 6-9 stretch to the end of the season, including a four game losing streak, was not a proper send off to the post-season. For the prior decade the Kings were dead before they even left Independence, Missouri. In 2004, an 11 game skid to close the season was a pretty obvious case of getting stampeded by your own oxen. The Kings just don't close out their seasons well, with last season as an exception, and even still they lost twice, albeit in overtime, to the Sharks.

Yeah, it was only one game. Yeah, the Kings have looked pretty crappy nearly every time they have played the Stars. But that was a real shit-tastic game. The other problem was that the Kings had a similarly god awful game about a week back against the Coyotes. Sometimes a loss is just bad luck. Other times it's because you play like a steaming bucket of ostrich vomit. When the latter starts showing up occasionally, I get pretty worried I am getting close to Oregon again. It's only a matter of time before Drew Doughty or Justin Williams comes down with cholera. 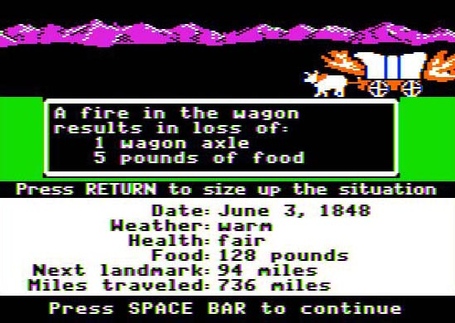 The Kings followed up their last shitty performance by having a mediocre game against a gassed Minnesota Wild team. Still, L.A. coasted to a 3-0 win. Now they go up against a Colorado Avalanche squad who is in the tail-end of a back to back. Preferably, I'd like to see the Kings dominate the game from the get-go, but at this point I'd take a slugfest. Whatever it takes to get them to wake the hell up.

Prediction: My wagon floods after I try fording the river.